Yet another SE (Story of an Indian Software Engineer), by Simon Saha 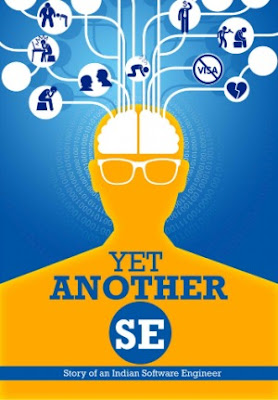 About the author:
Simon Saha is a software engineer from New Delhi, India. This is his first venture into publication.
Initial impressions:
The story is the life of an Indian Software Engineer (there’s apparently a marked difference between a Software Engineer, and an Indian software engineer) who has entered the field because he doesn’t want to but has to and in order to get a fat salary and a good wife, who spends time trying to make his bosses understand the work and at the same time, doing all that makes him drown in an ocean of software engineers.
My thoughts on the book:
The story is in first person narration. The protagonist is Rohit, a software engineer. The story begins with a dekhan-dekhai (the meeting ceremony before an arranged marriage) where he and his parents are on their way to see a prospective bride Trisha. As expected, there are treats like samosas and kachoris and sweets that the bride’s side arranges to welcome their prospective in-law. However, the twist here is that the brother of the bride is also a software engineer who immediately seizes upon the chance to try and get himself a job in the groom’s company. I understand that the talk may have been drab between the brother and Rohit, but I feel “I was working in ABC and DEF” doesn’t work. Put a company’s name. Make one up if need be, but ABC and DEF just doesn’t cut it. The story moves on to the first talk between the girl and Rohit, where he’s smitten enough to start telling things that aren’t as honest, like he likes reading books and such, which land him in a little trouble.
The next chapter onward, it is more of the office work dilemma of the software engineer. Handling clients who demand a lot of work to be done in less time, project leads who agree to do one thing and after the client hangs the call, do another. Office politics where the one who doesn’t deserve something gets it and Rohit has to do what it takes to turn things his way. In between, his obsession for Trisha somehow keeps growing and she does her bit to try and get her brother into Rohit’s firm. The brother seeing his love for his sister tries to blackmail Rohit emotionally by putting the marriage with his sister on the line. After rejecting the brother at first, he tries to make it up for the sake of love by forwarding his resume for some other work. We see the obsession for onsite work abroad and the troubles Rohit faces there, which he conquers. Realistically though, I can’t quite see anyone leaving India and reaching the United States in a “couple of hours”. If the author meant to say the time passed quickly because of Rohit’s eagerness, the emotion isn’t brought out with the choice of wording, and the same choice of wording when the return to India happens doesn’t make sense.
He returns with a new status of Foreign returned SE to see that his parents have seen even more prospective brides, all of whom he rejects for Trisha. Then a race for promotion happens, one which he wins by distracting his close competitor with another temptation of being married to a foreign Software Engineer. Then he becomes a team lead and ends up in a dilemma which he solves by thinking like how his old team lead did. In the end, he gets his happily ever after with Trisha and we see the family life of an Indian software engineer.
Closing thoughts:
I guess the description the author gives pretty much tells the reader what to expect from the story. Being a software engineer who is not in the IT field, I can’t quite say I disagree with the notion of a software engineer being that, but yes, I have seen people from that “nothing else to do, so I’m an engineer” category. The genre which Simon put in the contact form on my other blog told humor/satire, and yes, I do think there are a few things that do bring out the humor part. But what makes that humor become lost are the many proofreading errors that are present throughout the book. I can agree with one or two at places where they can go undetected in the narration but not so many, and that includes punctuation as well. The author chooses to highlight some terms in bold where the protagonist says one thing but means another completely, but that works only to a little extent. The software terminologies that are used manage to stump even a reader who is a software engineer, and I don’t quite think it is in a humorous manner. I don’t agree that every “Indian Software Engineer” is obsessed about marriage and doing whatever it takes to get that arranged marriage to go through either. The pace of the narration is not quick, but the book is a small one, so it won’t take long to read.
Perhaps the initial story idea, to show the life of one software engineer in the Indian IT industry, had merit. If taken upon a little more like fiction, and proofread properly, perhaps it’d have been better. As of now, this felt more like the rant of an Indian IT professional than a fiction of one such SE’s life.

This review is for a review copy of the book given to me by the author. Thank you, Simon.
Posted by Vinay Leo R. at May 01, 2013
Email ThisBlogThis!Share to TwitterShare to FacebookShare to Pinterest
Labels: eBook, Humor, Kindle, Leo, Simon Saha