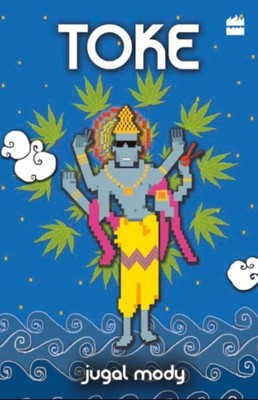 About the author:
Jugal Mody believes in fiction. Before handling web and social media for Filmfare and Tehelka, he worked in gaming. As a rule, he only writes to feel like a dog sticking its head out the window of a moving car. This is his first book.
Thoughts on the cover:
Witty, humorous portrayal of Lord Vishnu, which sets the tone for the novel itself.
From the blurb:
I’d pinch myself if Lord Vishnu appeared in front of me, regardless of if I was high or not. The blurb promises a delightfully humorous plot, fresh and appealing.
My review:
It was very unexpectedly that I received this book as a review copy from Indi-blogger. I think that it had been so long between the date of receipt and my applying for the book that I thought I wasn’t selected for reviewing the book at all.
So coming to the novel, what I found in this book was partially what I expected. It was a fresh plot. The protagonist is an Indian dude, not famous or known, just an average chap with a run-of-the-mill job and a sort-of dominant family who are disappointed in him. He wakes up one day to see a guy in a funny outfit who he recognizes as being similar to a god. (No, he doesn’t realize the name) Stuck in a crappy job, he falls asleep at his desk only to be sent home with a half-day pay cut as punishment. Instead, he heads off to his old college-mates’ place where he decides to quit his job, becomes high for the first time and falls asleep. He wakes up to find a talking crow that likes to get high too, and one later he finds to be the same funny looking God he saw before, Vishnu. He is informed that the fate of the world is in his hands, along with his friends. And thus begins the adventure.
We can relate to the characters, crazy yet so familiar to our own at times. The narration is crisp though a bit predictable. The story moves quickly, sometimes too quickly for my liking. Humor is there, but I feel that it gets a little mundane as the story goes on. If I were to read it a second time, I might not find it just as humorous. His portrayal of Lord Vishnu challenges mythology and our beliefs and it is fun to imagine God being such a casual person, one who we can hi-five and call dude.
Overall, this is a fun read, and I feel it is one-time read. A confident debut offering.


This review is for a review copy of the book given to me by Indiblogger and HarperCollins. Thank you.