Sahyadris to Hindukush - A Historical Novel by Aneesh Gokhale 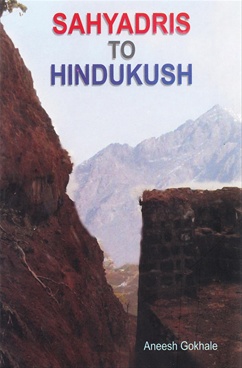 About the author:
Aneesh Gokhale works as a navigation officer in the Merchant Navy. This is his debut book based on one of his favorite subjects, Maratha history.
Thoughts on the cover page:
I’d have liked a better cover. The book, a novel of historical events with elements of fiction, is about the battle of the Marathas to keep their flag flying high. So that could’ve been reflected in the cover, rather than just a shot of the mountains.
Impressions from the blurb:
Historical events dramatized by fictional elements to give them a thrill and bring them to life. History has not been one of my favorite subjects in school, so reading offers a personal challenge as well.
My thoughts on the book:
Firstly, thanks to the author for a review copy of the book. As indicated on the blurb, the novel does try to bring alive the life and times of the Indian subcontinent in the 18th century, and it succeeds in that element. The novel begins with the demise of the Maratha Peshwa (commander) Bajirao, and the pensive mood of Chhatrapati Shahu as he mourns the loss and looks at who should be the next commander. He calls forth his chieftains to seek their opinion, though he knows who he wants to appoint. He also invites Chimaji Appa, brother of the former Peshwa. After a discussion, and turning down of a suggestion by one chieftain, Shahu appoints the teenage son of Bajirao as his Peshwa much to the surprise of the courtiers and others present.
The novel proceeds to other events like Bhosale’s incursion into Bengal and young Peshwa Balaji Bajirao’s battles to conquer Orchha and his rivalry with Bhosale who had not been happy with his appointment as Peshwa, and the Chhatrapati’s intervention between the two of them to demarcate their territories. On the other side, we are taken to the appointment of a new leader for the Pakhtuns in Ahmed Shah Abdali. Then we move on to about seven or eight years later when the Chhatrapati passes away and we’re introduced to a part of the dirty politics when the Queen Sakwarbai is tricked (not sure if that’s the word, since she partly wanted to do it too) into committing Sati (a former funeral practice that was considered as dharma, when a childless widow would immolate herself on her husband’s funeral pyre). The heir incumbent is later found to be worthless and imprisoned and further events follow. I’ll stop the summary at this point, so I don’t end up putting the whole book here.
What I’m impressed by in this book is the pace of the narration. When it’s a historical novel, and a war-oriented one at that, a quick pace is something I feel is essential, and the novel has that enough to hold my attention. Aneesh also has a decent command of the language and uses it most of the time to his advantage. His effort is obvious and he’s referenced over twenty books on the Maratha history to put into this novel. He’s also mentioned those references, given a chronology of events at the end and a glossary of few local terms to aid the readers.
I thought a couple of things were off in the opening chapter. Aneesh mentions that Raghuji Bhosale had cut short his Karnataka campaign to be at the meeting of the chieftains. But I think it should have been “his campaign in the Carnatic”, because the name Karnataka has only been in usage since 1973. Also, after earlier mentioning Shahu didn’t want to offend his chieftains like Holkar and Bhosale, only the latter’s opinion has been mentioned. Likewise, in the meeting of Pakhtun chieftains as well, many have assembled and a fight happens during meeting, but in the end, just the Pir’s opinion seems enforced. I am not arguing with history, but the proceedings seem very fast paced in the politics there (which feels odd considering it is India). Only when you look at the chronology at the end can you tell that years have passed between events. The pacy narration makes one seem it’s happening quickly.
What I’d suggest Aneesh for his future historical novels (and I feel with his passion for history, there will be some for sure) is to not include photographs in the narration, or quite a lot of the reference details at the end of the book. Since the aim is to dramatize and bring the scenes to life, a lot of it should be in the narration itself and let the imagination of the reader do the rest. Similarly, titles that are obvious can be avoided, just numbers are fine. Though he does command the attention of the reader through his English, I would also suggest that an indirect tone be used. For e.g. I quote from the book, “Just like the annexation of Indore and Ujjain by Holkar and Scindia respectively….” It seems more like a teacher telling to a student than a narration. Maybe something like “Holkar had given Indore to the Maratha empire, and Scindia Indore” might have done it better. If just a few characters are fictional, then that need not be mentioned, or if it must be, I think the author note can come at the end, rather than before the prologue itself. Lastly, more proofreading can be done, and please include the ISBN and price on the back-cover.
There’s a very thin line between a book being a historical novel with fictional elements and a history textbook. It is my opinion that Aneesh Gokhale’s debut offering “Sahyadris to Hindukush” travels that thin line throughout the book, at times stretching into the latter side. That being said, it is an accurate telling of events with that tinge of dramatization. Good pace and flow in keeping with the chronology and it does well as a historical novel.


This review is for a review copy of the book given to me by the author. Thank you, Aneesh.