It Can't Be You, by Prem Rao 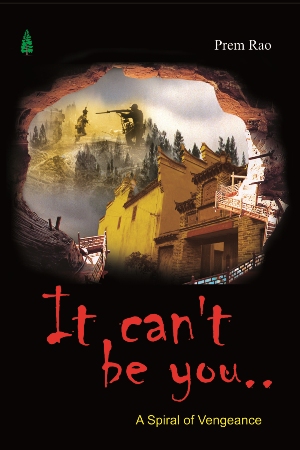 About the author:
Prem Rao re-invents himself as an author by turning to his passion for writing after 36 years of professional work as a talent management specialist and executive coach. This is his debut work.
My review:
It was by chance that I met the author Prem Rao, an avid blogger, through a blogging contest. It was later that I came to know he was already a published author of a thriller novel. And it was only near the publication of his second novel that I finally purchased this book, his debut.
The book looks at Colonel Belliappa and his family, from the moment of his death to what transpired that day, then to his daughter Shefali and son Pritam, and his wife Elena. We are taken further back, to the war days of the Colonel, and to the childhood memories of Shefali, to the story of Elena, in different chapters.
I think the book is very decent for a debut, but it’s not an end-to-end thriller. What lets it down, in my opinion, is the time traveling. We begin with the words, “The man was dead. Of that there was no doubt.” And that opening immediately sets the ball rolling and we find ourselves asking, “How did he die?” Then there’s a touch of Sherlock Holmes with the writing of the words, “It can’t be you…” on a post-it. Remember the word “Rache” on the wall in “A Study in Scarlet”? So we’re all set to go into an investigative thriller mode, but almost immediately, the time travel begins with the story of what happened that morning, then who is Shefali, Pritam, Elena and what were their characters like. There is excellent detailing, but I lost interest in the murder after the detailing continued.
Not to judge a book by its cover, but this one was almost childish, confused. The only thing remotely chilling about it was the “chiller” font for the title. Definitely needs a better cover. And also, a better font inside, a little bigger as well. The presentation felt cramped.
I like the idea, but it left me a little bored. It’s not your usual crime thriller. It’s an investigation into the past, an effort to bring out details of the characters. A one-time read for me.