A Pen In My Heart - Bobby Stevenson 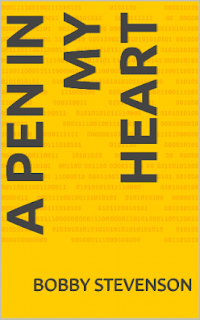 About the author:
Bobby Stevenson was born in Scotland and schooled in Paris before he settled in the Catskills with his family. He traveled to various parts of the United States as a software designer before attending film school in London and getting a Masters in Screenwriting and Film Production.
My thoughts on the book:
It’s not easy to understand or review poetry. It’s nice to read. What is interesting to note is that sometimes, or most times, the same verse is interpreted in different ways. This review is my interpretation of this book, but I think most who read this set of verse might be inclined to think the same way that I have.
There is vividness in the verse here, but what I find in common is a quality to inspire not only more verse but also life and love as well.
One of the poems in this book is titled “Leaving Traces”. In its simplicity, it invites hope unto itself. It tells us to not think that we are alone, or that what we do might not be impactful in life. It tells us in a moment we pass another life; we leave a part of us with that life to take it with them wherever they go.
Another is titled “To All The Things”. This leaves me with mixed feelings. Though I can relate with the poem, this small eight line verse is also poignant for it ends on a sad note.
The poem titled “Be Who You Are” is quite inspiring. It ends on the note that says – “Be who you are, let happiness and joy break through, for the universe was wise enough to only make the one of you”. Though “happiness and joy” feels redundant, the thought behind it is something I appreciate.
There are 35 poems in total in this Kindle book which are simple and well written. However, there is one minor problem. The poet has accidentally printed the same poem twice. It’s a free book as of now, so I think it is well worth a read. Poets of ALOP, give it a go!