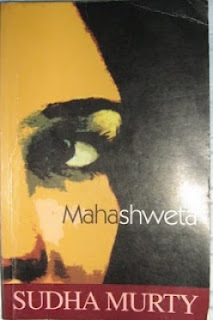 
Synopsis(As given at the back of the book) :

"Anupama looked into the mirror and shivered with shock.
A small white patch had now appeared on her arm."

Anupama's fairy tale marriage to Anand falls apart when she discovers a white patch on her foot and learns she has leukoderma.
Abandoned by her uncaring in laws and insensitive husband, she is forced to return home to her fathers village.  The social stigma of a married woman living with her parents, her stepmothers continual barbs and ostracism that accompanies her skin condition forces her to contemplate suicide.  Determined to rebuild her life against all odds, Anupama goes to Bombay where she finds success,respect and the promise of an enduring friendship.

Mahashweta is an inspiring story of courage and resilience in a world marred by illusions and betrayals. This poignant tale offers hope and solace to victims of the prejudices that govern society even today.

Mahashweta is a book which depicts how unpredictable life can be. Its shows us the hard side of life and inspires us to be a little bit more like the protagonist who strives to make her life better and happier even in her darkest hour.

The story starts by introducing a man who is a doctor, busy in the hospital saving lives and helping people. He is shown to be honest, caring, thoughtful and obviously handsome. The perfect prince charming.

Then the focus shifts to Anupama, a girl in her mid twenties who is selling tickets at her uncles (who is mutual friend between the two) house. Seeing the doctor well dressed, she assumes him to be rich enough afford more than one ticket. With her jolly attitude and charm she convinces the doctor to buy two tickets.

The next day, when she sees him in the audience, she is swayed in love. He is also carried away by her beauty. Its the perfect love story and they get married lavishly.

Two months later, Anupama's in a blissful state. In her wildest dreams she never thought that she, a poor village teachers daughter would get settled into such a wealthy family. She had the perfect husband who pampered her and treated her like a queen. Anand goes to England for a fellowship and Anupama is to join him in two months. It was too good to be true.

That is the end of her happiness. She first finds a white patch on her ankle. Knowing her mother-in-law would disapprove she sneaks off to the doctor who confirms its leukoderma, a skin disease that is not contagious and nothing much to worry about. But Anupama knows its more than enough to create a ruse in her perfect life plan.

She hides it at first, thinking she would go to England and then tell Anand. But her mother in law finds out and sends her back to her fathers house in the village.She feels Anand would understand as he is a doctor but he never replies to the multiple messages she sends him. Being back in the village is  no consolation to her as her stepmother's taunts trouble her. After her stepsisters marriage is broken due to the family finding out about Anupama's condition, She feels guilty and decides to come to Bombay.

At first,she stays with her best friend and slowly she starts to feel depressed as  Anand has still not replied to her letters and her best friend's husband makes a move on her when they are alone. Nothing is going her way and that's when she contemplates suicide. Then she realizes she shouldn't end her life just because someone else's mentality is wrong. She gets a job and recovers from the pain she has unnecessarily been put through to come out as an independent woman who is proud and able to support herself.

Very few fiction novels cause us to look within ourselves and question our attitude toward a social issue. This is one of those books. It makes us wonder whether love is worth it or if it is just a cognitive illusion. Would you rather be independent alone than repressed together? Its a story that leaves you thinking long after you close the covers.

The best past of the book in my opinion is the post script which explains how this simple story changed the life of one of the readers. After all don't all authors aspire for their stories to make an impact on someone and change their lives? That is exactly what Sudha Murty has accomplished with this book. Simple and well defined, a must read.