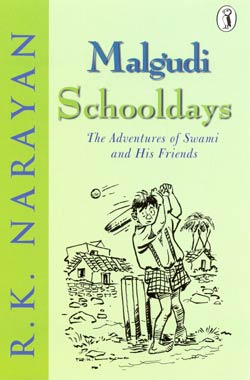 About the author:
RK Narayan was an Indian author whose works of fiction include a series of books about people and their interactions in an imagined town in India called Malgudi. He is one of three leading figures of early Indian literature in English. He is credited with bringing Indian literature in English to the rest of the world, and is regarded as one of India's greatest English language novelists.
From the description:
Swami’s days are full of action. When he’s not creating a ruckus in school, or preparing for his exams in his own inimitable way, he’s trying to acquire a hoop from the coachman’s son to run down the streets of Malgudi, playing tricks on his grandmother or stoning the school windows.
My thoughts on the book:
This book is a collection of short stories, the childhood chronicles of Swami, and his friends Rajam and Mani in the imaginary town of Malgudi. Written in direct, and simple language, this book is a pleasure to read, and one that can be read end to end even at a stretch. This book is something that I feel any child would enjoy, as the recurring criteria in the book is the adventure and school life of children. That being said, I think the opening lines of the first story in this book would bring a smile to any adult, especially people who find Monday to be the most boring day of the week! Lively in the plots, filled with the innocence and fun of those days from childhood, and one that quite a few of us might have seen and enjoyed as a series in TV, this book is something that can be reread any number of times.