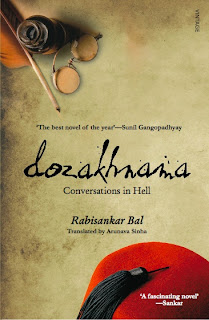 Have you ever been burnt by a book? Been trapped between its pages, gasping for air? Have you felt that if you read any more you'd die; but if you didn't read, you'd die anyway? If you've not had the pleasure of such a pain, read Dozakhnama.

Page after page of this book, I've been burned. Page after page, I've suffered as a reader. Page after page, I've yo-yoed from heaven to hell and back. I've seen creations divine, and endured the labour pains that every creation demands. Author Rabishankar Bal takes you through the agonising journey of two creators of beauty and if you are a writer/poet yourself, the book feels like a kick in the gut. And yet I held on, read it as slowly as I could, wishing this sweet pain would never end.

Dozakhnama is originally a Bengali novel by acclaimed author, Rabishankar Bal and it has been translated into English by Arunava Sinha. Between its pages lie Saadat Hasan Manto and Mirza Ghalib conversing with each other from their graves. The sutradhar is an author who has stumbled upon an unpublished work of Manto's and has set out to translate it. In this mysterious manuscript is recorded this fantastical conversation between modern Urdu writer, Manto and one of the greatest poets in Indian history, Ghalib.

Speaking across nearly a century, Manto and Ghalib share the stories of their lives with ghosts for company in the night. Manto and Ghalib take turns in every alternate chapter to share a piece of their lives and soon the line between historical facts and fiction is blurred. Bal owns their voices with such confidence that one is loathe to believe that the words are not really Manto's or Ghalib's. Sprinkled with little dastaans and poetry by greats like Mir and Rumi and of course, Ghalib, the book charts not just the life of these two artists, but also the literary ethos of India from the 19th through the 20th centuries.

Though far removed from each other in time, Ghalib's and Manto's journeys seem similar. But then, all artists have journeys like these - travelling through their personal dozakhs, their private hells while creating honest art. Ghalib and Manto both had their share of love, poverty, victory, heartbreak, alcoholism, and persecution for their truth, their words. Ghalib's India at the end of Mughal rule, and Manto's India at the end of British rule are very different, yet the trials of an artist's life are the same, the cycle of pain and creation neverending. Bal chronicles their lives and poetry and pain in one seamless breath, creating this masterpiece of a book. A thought must also be spared for Arunava Sinha and how he too must have partaken of this fire when translating this book. It's brilliant and I believe none of the effulgence of the original work was lost in translation.

Do yourself a favour. Read this book.