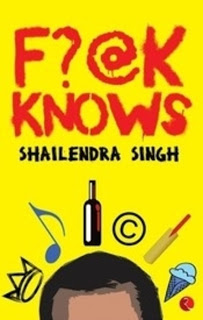 What do you want from life? Are you on the right track? Are you truly happy? If your answer to these questions is ‘F?@k knows!’, then this book is for you. Find the answers to life’s most important questions with the help of uber-successful entrepreneur, Shailendra Singh, co-founder of Percept and inceptor of Sunburn. Told with sparkling, flavourful and in-your-face humour, this book will advise you on how to:

*Find yourself (Because you’re probably lost. Admit it.)
*Follow your heart (Because if you don’t then you’ll die unhappy, you stupid f?@ker.)
*Achieve your goals (You know you want to.)
*Live life like you give a f?@k (Because…why not?)

Candid and thoughtful, F?@k Knows will show you how to really live life on your own terms, to do what you want to do and not what you have to do just because your father said so!

I rarely pick self help books. I have read my share of books when in college and when I began working , and though I did not like many or could understand it all , the lessons make more sense now. Be it career , life , spirituality , relationships or other phase of life , there is always a book about it. I can recommend a few to some one who genuinely wants to read such books But I will think thrice before suggesting this one. and here is why :

I am not a fan of the word *fuck* ! however you write it , you will say it like that. And the maximum number of times i use this word is once a week to say "wtf"  ! And I do not know many people who say it either any more frequently.

I do not like anecdotes / incidents that refer to sex and related stuff. Neither do i gain any insight from such analogies .  Like the chapter : Orgasm as character study where the author tells about watching 2 of his friends having sex ( with some stranger ) and finding a character analogy based on way they f?@k. As much it is amusing as title , I was not impressed. This was not according to my taste. Plus , such mentions make sure I am not giving this book to anyone below 18.

The author did everything according to his dad , struggled to make an empire , earned millions , suffered a heart attack and that's when he realizes he has not actually lived his life. That he has been doing it all wrong. It happens. But any way you tell this story , It remains the same. The story ( or parts of it) are mentioned many times in the book which kind of become a contrast to the stuff you want or hope to gain from this book. If other's stories inspired , we don't need such books at all. We all need to be convinced that we can make our own success stories.

Having said this , I will still tell you to try this books for some parts like - "And then ? and then and then" ; "Few of my favorite things" ; The cheesecake experiment ( If that can keep few people away from casual sex) ; Mind as technology ; Stop thinking , start doing ..

The author has some really nice ideas and some easy to digest philosophies. Some of the analogies , the examples and the incidents he sketches in the book are funny and wise beyond my age for sure. He has a good flow in his narration and doesn't sound preachy but he does sound some one *trying* too hard to be casual. The overdose of F?@K as a verb ( or adverb) might put you off. Not to mention you can not pass this book to just anyone. Not to my bro or mother for sure I know.

Confession : I read 120+ pages complete and then 7-8 chapters in random but then I was turned off by the one of chapter. . And then I only finished the chapter name and the subtitles ; which are good enough to get the context and gyaan in straightforward manner.

I am not into non-fiction books, especially self help ones. Never been a fan of them. But when Shailendra Singh's  F?@K Knows came in for Blogadda's reviews, the title (very obviously) and the excerpt really intrigued me and I decided to give it a shot. Well, the book didn't change anything (if at all self help stuff are meant to do so) but reading it sure was fun.
For starters, the cover isn't quite interesting as I would have liked it. But the red lettering on the yellow cover pretty much stand out for themselves (the title is an attraction magnet in itself and instantly piques the readers' interest :P).Imagine my condition when I get the book from my dad who had opened the package and is handing me the book with a very curious and doubtful expression. :P
If you are somebody who is not comfortable using the "F" word or hearing people use it liberally, then you might consider staying away from it. The book is generously doused with the word and the author makes it a point that it serves the purpose it is being used for, to keep the readers' interest alive. Using expletives,simple words and a colloquial tone in the first person instantly draws the readers attention as the narrator takes them into his trust as he narrates his journey and how he failed and then succeeded.
Listening to somebody's real story is more believable than hear people preaching about things. I think that is what makes this book different. The author does not tell you anything more than what you might already know. But it is the presentation of the book, the narration that makes the read really enjoyable. The tongue in cheek humor coupled with witty refrains and epigrams are what make the book.
The ideas get a little repetitive after a while but I think it is because the author does it to drive the idea deeper into the readers head (remember the repetitive lines of nursery rhymes? the author does the same here, in a funnier manner). The book might not transform you view of the world or switch on that bulb in your head (like those Mentos ads say "dimag ki batti jala de") but it sure will keep you entertained as you flip through the pages.

This review is a part of the biggest Book Reviews Program. for Indian Bloggers. Participate now to get free books!
Posted by Swarnali at March 24, 2013
Email ThisBlogThis!Share to TwitterShare to FacebookShare to Pinterest
Labels: 3 star, Non Ficion, self help, Self-help, Shailendra Singh, Swarnali