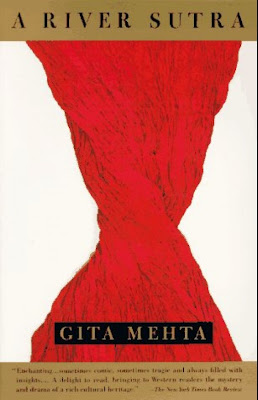 
The good/bad invention/addiction that is Twitter is perhaps the single most influential sphere of my adult life. I've made and parted with friends here, built some real and imaginary relationships, had some genuine camaraderie unnecessary fights; I've generally allowed it to dictate big chunks of my emotional life. For me, Twitter is as real as virtual life can get. Of the most dear people I've met here is @scrollsnink or Reema. I've never met her in real life, but I can claim to love her as I would a sister. It is she who gifted me 'A River Sutra' by Gita Mehta, and I owe her big time for this one.

When Reema sent me this book, I was unimpressed with the aesthetics of the cover. It seemed mystifying, but not enough for me to pick it up immediately. After months, when all my 'review' books were finally done with, I sat down with 'A River Sutra', and it wouldn't be exaggeration to say that I drowned immediately. I realised within a few pages what The Illustrated Weekly of India meant when it said 'A River Sutra is a seminal book' (as quoted on the cover).

Page after page I wondered why the Amishs and Chetan Bhagats of the world have gotten popular and why a book like 'A River Sutra' hasn't enjoyed its deserving share of accolades. The book is a collection of stories - the monk's, the teacher's, the executive's, the courtesan's, the musician's, and the minstrel's - interlinked by the retired government official's, who acts as the sutradhar. The stories are all based along the banks of the Narmada, bringing alive its many myths and legends, coloured through the lenses of human emotion and experience. Each story is poignant, absorbing and with a magical quality to it. They are all tales of human transformation from the physical to the metaphysical, just like deliverance through the sacredness of the river Narmada.

Mehta's genius shines through in every story - both as a short story writer and a novelist. The vivid, human and completely believable protagonist of every story illustrates the writer's masterful character sketching, and one is led on rapid journeys one after the other. Whether it is the executive's bored life in the city followed by a mysterious encounter with a tribal woman, or the courtesan's tryst with a notorious bandit, each tale not
just involves the reader, but inundates him, washes him away like the swollen waters of the Narmada. Mehta writes lyrical prose and often quotes the most beautiful couplets from famous works, ranging from Rumi to Shankaracharya. She writes with the kind of simplicity only possible for geniuses, yet never compromising on her artistry. The musician's story, in particular, pierced my heart with an intensity I've not encountered in literature often. Her knowledge of the Narmada myths, Indian culture and music come through without ever sounding pedantic.

Gita Mehta has easily become one of my favourite Indian English authors, and I can place her among the ranks of Anita Desai. I would recommend this book to anyone interested in contemporary Indian fiction in all its beauty.