Queen of Dreams by Chitra Divakaruni 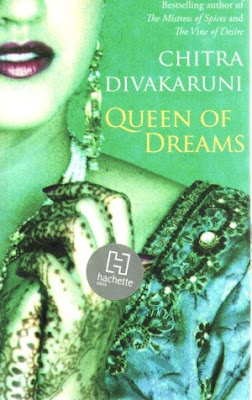 About the author:
Chitra Divakaruni is well known for her highly acclaimed novel, “The Mistress of Spices” and her award-winning collection of short-stories, “Arranged Marriage”. She was born in India, but now stays in California. She is a teacher of creative writing and a published poet as well.
Impressions off the back:
A family saga with a fantasy touch to it, and with the genre listed as literary fiction, the language would be eloquent. It feels strange to read the quote, “I dream the dreams of other people, so I can help them live their lives” on the back cover.
My thoughts on the book:
What if our dreams weren’t ours, but dreamt by someone else so we knew what we wanted. It feels strange, somewhat scary a thought to think. What I want is not known to me till someone else thinks it and puts it in my head. Then again, when you look at it from a bigger perspective, life is somewhat like that for a lot of us. Haven’t we at one time in our lives tried to live the dreams dreamt by our parents for us?
Divakaruni’s book, “Queen of Dreams”, is built around such a plot, where the protagonist’s mother dreams the dreams of other people. While the protagonist, Rakhi, sleeps alone in her room, and her father in his, her mother sits in another doing her ritual, dreaming, not letting anyone else come close to her. Rakhi’s father puts it as “the place that was at her center – that place was reserved for the dream gods or demons, whatever she called them.”
Rakhi, an artist and divorced mother living in the USA, juggles between her painting work, running a coffee shop with her friend Belle, and taking care of Jonaki her daughter. She struggles with her emotions, her idea of life as opposed to her mother’s… at one time, she even says that she still wonders what is opportune, her naivety or her mother’s cynicism. She wants her ex-husband out of Jonaki’s and her life, though Jonaki still adores her father.
When an outlet of a bigger coffee shop chain opens near their “chai house”, Rakhi and Belle struggle to think positively. In between, her mother dies in an accident, and she struggles again with her emotions. Her father attempts to help her with the coffee shop, and manages to find a way. With Sonny’s help also coming in, they get back some customers. But then, a bigger surprise comes, and followed by more shocks.
Overall impressions:
I’ve read Divakaruni just once before, with her book, “The Mistress of Spices”. Looking at the book from an overall perspective, the outcome of the plot seems similar. Yes, it has characteristics of a literary fiction… the eloquent language, the complex characters, the deeper meanings, the serious tone and a slow pace that makes it difficult to read. The dilemma of the main character is carried right through the novel and leaves a mark. On one hand, the protagonist doesn’t believe in her mother’s ability, on the other, she wants it very badly. She hates her ex-husband, but still finds herself a little attracted to him. It makes for an interesting, albeit slow reading. There are quite a few lines that linger after the read, but it is a poem that leaves us admiring.
Rating: 7/10