Murder on the Mind by LL Bartlett 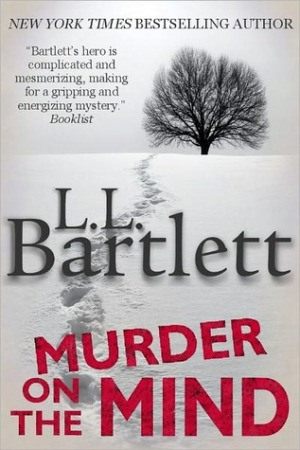 My thoughts on the book:

Hunting for free mystery and thriller books on Kindle, I came across the title Murder on the Mind by LL Bartlett. The book is her first published novel (published in 2005) and the first title in the Jeff Resnick series.

We are introduced to, and drawn into the mind of Jeff Resnick. The protagonist is a formerly unemployed, and a newly appointed insurance claims agent. He’s celebrating the occasion by playing pool with friends. During the game, he has a sudden vision, one that he cannot understand or explain. He decides to leave early so he’s not late for work. He’s thinking of the future, of asking a girl out, of the future. Bad luck strikes then and he’s mugged, beaten to within an inch of his life.

The book resumes showing us that Jeff is now under the care of his half-brother Dr. Richard Alpert and his live-in lover Brenda. He still gets the sudden visions that he can’t make sense out of, and his health has expectedly receded after the mugging. He also finds that his sixth sense has gone up, and can sense something awry, or feel something odd to enter a room. He finds Richard doesn’t believe in his visions much, but that Brenda does. Richard, from the brother’s and physician’s perspective, thinks that the visions are just hallucinations from his brother’s unfortunate condition, that his serious head injuries are the reason for it.

Meanwhile, Jeff connects the vision to the death of a prominent banker. He starts to feel a moral responsibility to solving the mysterious nature of the death, and with Richard’s reluctant help, begins to dig deeper. He crosses paths with the local police, who want him to stay out of their way, and the wife who still is deep in mourning. The light read thriller follows Jeff’s psychic visions that lead him to various turning points in the mystery, and Richard’s reluctant but timely help to his brother.

The story isn't boring in what differentiates it from other thrillers. The first person narration helps us get into the mind of the protagonist, and the twists and turns keep the story flowing. The family angle explored is also nicely done.

If I were to pinpoint negatives, I'd say the mugging was a tad unbelievable. The protagonist's psychic vision starts before the mugging, so it'd have been good if he continued to explore that way. Bringing in a rich step-brother who didn't get along with him felt odd. It lent pathos to the plot for sure. The psychic vision also helps zoom over parts that needed detection, or solving.

I quite liked the story overall. If I'd had the hardcopy, perhaps I'd have finished it in one or two sittings. Reading it on Kindle took a little longer. Other than few parts that might leave you disappointed, the story holds well.