I was introduced to Maelstrom 2 years back when the author Ann used to write scenes of the book on a blog. And after reading just 2-3 posts I knew I would love the book. 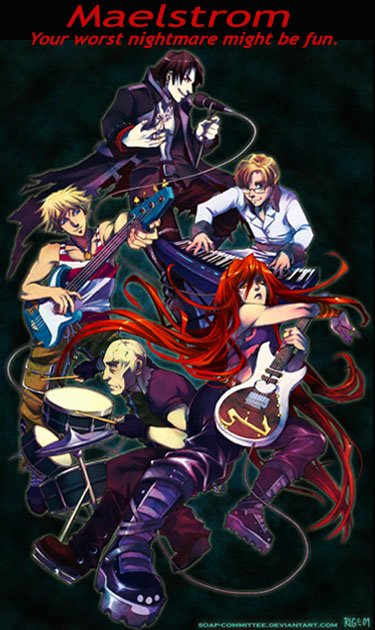 (This is the image from the blog)

As luck would have it , I happened to land on her latest blog and saw the link to buy the book.
I bought , read , finished within 24 hours.

When a genie grants you a wish, you don't expect to return the favor. Struggling promoter Ricky Landon is on the verge of giving up his dreams when he dumps sexy genie Kalila from a junk store lamp. She grants his wish to manage a talented band, but she has a wish of her own...she wants to be a rock star. Kalila's band consists of fellow demons whose genius on stage is matched by their ability to get themselves banned from every venue they've ever played. Ricky is willing to do what it takes to help them succeed, but with a zombie on drums, an incubus on bass, and a vampire lead vocalist, the off-stage antics are a little more serious than diva behavior and trashed hotel rooms.

I have always wondered and wanted to read about various fantasy creatures thrown together in one plot. But as a Rock band ! Well that was new to me and sounded so exciting. Give them a human manager and warewolves as tech and security staff , you are in for a fun ride ! Rick is the typical broke,unemployed,loser sort hero when he meets the djinn Kalila and she grants his wish to manage a rock band. Little does he know , he would be managing Kalila's own band of demonic creatures and a fairy.

Neither he is aware till few days that the band has a bet to win with another Metal band of Gods, lead by Thor. while the plot is simple , Ann writes amazingly about true nature of each creature, including Rick. The members can neither stand each other's habits nor stay without each other. They fight , argue , throw tantrums, crib about their food , make rick's life so much of a terror and adventure that can even cost his life. But never do they give up on their goal of gaining human popularity with human means.

The writing is easy , witty , engaging and the conversations just keep you smiling often. I fell in love with every of the band member one by one and still wish I could meet and hear them !!

When I started the book , I had kind some expectations from it. And I am glad the book lived upto them and more.

Also the site has extra scenes , so its a lot of fun more if you like the book

You can get the kindle book from here. And other ebook formats here
Posted by Pratibha at January 06, 2013
Email ThisBlogThis!Share to TwitterShare to FacebookShare to Pinterest
Labels: Ann Pino, fantasy fiction, Humor