In Black and White by Rudyard Kipling


He was the youngest recipient of Nobel Prize in Literature, the first writer of English language to have that honour conferred on him. My inspiration in writing, Ruskin Bond, found inspiration in his writing. And if I had one regret emanating from the world of literature (which I know is vast and perhaps has no place for regrets), it was that I never got an opportunity to read any work of the great storyteller Rudyard Kipling. However, in a recent set of book Rupa Publications sent me for review, I got my chance to overcome that regret. 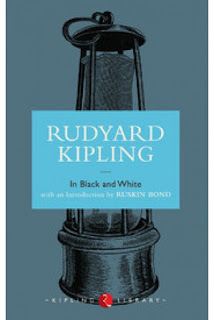 In Black and White is my first tryst with Rudyard Kipling, and what a grand, memorable meeting with the master-storyteller it has been. Kipling has been regarded as an innovator in the art of short story writing, and this book is only one of the many examples which lends credibility to that statement. In Black and White is a collection of some of Kipling's finest stories which shed light on the social, cultural and political fabric of India, as it was woven under colonial rule. The imperial conquest of power etched a firm, and almost cruel boundary between the ruler and the ruled - a reality which stories of this book bring out vividly. The language, I will have to admit, was not the easiest to understand. In fact, if anything, it was most abstract, but that is what gave space for philosophical ideas to run parallel to the main narrative of extremely engaging stories. A miner, a priest, a missionary, a betrayed and revenge seeking lover - each character has been drawn deep from within the womb of humble Indian terrain and represent in full the idiosyncrasies of Indians. The tales are endearing at times, witty at others, and scathingly ironical at certain places. Kipling presents both - the inherent innocence of Indians and the corruption which started taking roots under the reign of the Raj in these 8 short stories

It is a small book, priced humbly, to invite readers to the enamouring, but critical world of Kipling. My favorite among all is a story called "Dray Wara Yow Dee". Don't ask me what that means. I just know I enjoyed this tale of a lover betrayed, seething with revenge. For the first time, it was not poetry, but prose in which I found an unmistakable lyrical quality.

Kipling has a controversial place in History. He is credited with a doctrine which not just justifies, but glorifies imperial conquests. Given his philosophy of 'A White Man's Burden', I have always wondered how is it that Kipling wrote of nothing but India and its people, so much so, that many literary connoisseurs bracket him in the Indian Writing in English category. A man, not wedded to the sensibilities of this magnificent land could not have possibly written literature which seems like our own. Perhaps this dichotomy in Kipling's writing is best understood in the words of one of my English teachers, who warns with affection - History often doesn't give us the chance to alter our opinions, we must learn to be careful with them.