Between Shades of Gray - Rūta Šepetys 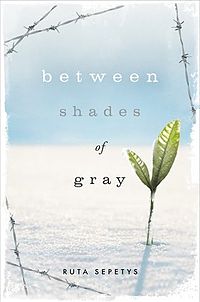 Impressions off the back:
The recollections of survivors can be brilliant. Anne Frank’s diary was famous (is famous). This book is written from the memories of survivors. It should be interesting.
My thoughts on the book:
Lina is fifteen years old. When the Soviets take over Lithuania, her family realizes they’ll be deported too and start to take precautions, like burning family portraits and hiding their silver in the linings of jackets, sewing them there. When they take Lina, she’s about to go to bed, and she’s in her nightgown.
Ruta Sepetys begins there, with a sentence, “They took me in my nightgown.” She creates interest in what is to follow after, making us wonder as to who took her, and why. Spoken from the first person voice of young Lina Vilkas, the first two chapters outline the memories of how they were taken, given twenty minutes to pack whatever is necessary but not dear, and just thirty seconds to relieve themselves. She and her family are crammed into a train, then put to work in a farm, given little to no privileges and treated as if they are no better than the lowest of the low. From the farm, they’re taken to an uninhabited place in the coldest winter. They find themselves, and the people around them struggling to cope with the work-rate their captors put them through. Their only thread of hope is that they will survive, and be free someday soon.
The book is not a diary, or an autobiography, but follows the thoughts and rebelliousness of young Lina from her point of view. Along with the thoughts, Lina also remembers things that are relevant to that situation. We find a young lady who has started to think beyond her years, an artist who draws what she is inspired to no matter how tyrannical she pictures her protagonists and models to be, and a girl who is an optimist, praying, hoping and telling herself each day of the journey that all will be well. She finds people who are kind, who believe that a sense of humor can ease the shackles that their situation puts on their heart, and also shrewd pessimists who feel a bullet to the head is better than fighting for survival. She is quick to judge, not wanting to see both sides of a person when she believes there is only one side to them. She finds love on the journey, experiences life’s cruelties and sees them happen to others around her. But it doesn’t demoralize her. On the contrary, it strengthens her will to survive.
Overall impressions:
“Have you wondered what a human life is worth?”
“That morning, my brother’s life was worth a pocket watch…”
Those are the quotes on the front and back cover of the book – teasers about the story inside. What Ruta Sepetys does with this book is somewhat brilliant I feel. She herself says that it was intended as a young adult novel. I agree with her. The language is simple and to the point. It doesn’t need a high level of vocabulary to understand it. The images portrayed are of hardship, cruelties that were put upon the people and the protagonist, the sights of life which a child needn’t be told or shown, but teenagers can read and not feel it too strong a novel. The book exudes hope. It wants to portray survival against all odds, and it does that. Even though it’s a first person narrative set nearly seventy two years back, you won’t feel this book dragging you, making you just want to go to the final page and end it. No. After you finish reading this book, the story still lingers on with you.
Rating: 4 / 5
Book Details:
Title: Between Shades of Gray
Author: Rūta Šepetys
Genre: Young Adult Fiction / Historical Fiction
ISBN: 978-0-141-33588-9
Publishers: Puffin
Price: INR 250
Reviewed by: Leo
Also for the First Reads Challenge at b00k r3vi3ews blog.
Posted by Vinay Leo R. at January 09, 2013
Email ThisBlogThis!Share to TwitterShare to FacebookShare to Pinterest
Labels: Historical Fiction, Leo, Puffin Books, Ruta Sepetys, Young Adult