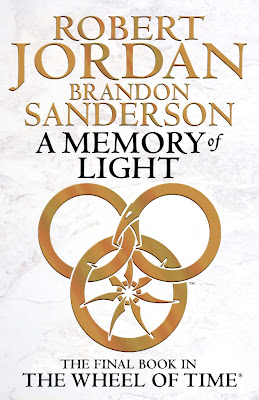 A MEMORY OF LIGHT

Final Book in the "Wheel of Time"

SYNOPSIS - For twenty years, The Wheel of Time has enthralled more than forty million readers in over thirty-two languages. A Memory of Light brings this majestic fantasy creation to its richly satisfying conclusion.
'And it came to pass in those days, as it had come before and would come again, that the Dark lay heavy on the land and weighed down the hearts of men, and the green things failed, and hope died.' - From Charal Drianaan te Calamon, The Cycle of the Dragon.In the Field of Merrilor the rulers of the nations gather to join behind Rand al'Thor, or to stop him from his plan to break the seals on the Dark One's prison - which may be a sign of his madness, or the last hope of humankind. Egwene, the Amyrlin Seat, leans toward the former.In Andor, the Trollocs seize Caemlyn.In the wolf dream, Perrin Aybara battles Slayer.Approaching Ebou Dar, Mat Cauthon plans to visit his wife Tuon, now Fortuona, Empress of the Seanchan.All humanity is in peril - and the outcome will be decided in Shayol Ghul itself. The Wheel is turning, and the Age is coming to its end. The Last Battle will determine the fate of the world. . .Working from notes and partials left by Robert Jordan when he died in 2007, and consulting with Jordan's widow, who edited all of Jordan's books, established fantasy writer Brandon Sanderson has recreated the vision Jordan left behind.

My arm will be my sword...
Hooves clattered on the ground. The Trollocs ahead hooted in delight, realising that their prey had transformed to retreat into a charge of men rushing right into their grasp.

My breast itself a shield...
Lan could hear a voice, his father's voice, speaking these words. That was foolish, of course. Lan had been a baby when Malkier had fallen.

To hold back the darkness...
The horses' hooves were becoming a thunder. So loud, louder than he'd have thought possible. He held himself straight, sword out.

I will stand when all others fall.
The oncoming Trollocs levelled spears as the distance between the two opposing forces narrowed.

It was the oath a Malkieri soldier took during the first posting to the Border. Lan had never spoken it.

He did so now in his heart.

"Al Chalidholara Malkier!" Lan screamed. "Lances, set!" Light, but those hoofbeats were loud! Could six thousand make so much noise? He turned to look at those behind him.

Hardcore fans like me may have already read the excerpt from the prologue "By Grace and Banners Fallen". And I know, friends, the emotion that swept through me then must have been coursing through you as well. Fear not, there is no let down. No quarter given back to the enemy. Brandon Sanderson has done the impossible. He has finished the tale.

Boy, where do I start? All the characters you met over the course of the first books are here. And you should see their roles man! They've been absolutely stunning. Its impossible to write a no-spoiler review without letting a few out. But I promise not to say anything important. Just a few hints here and there.

Remember the army Demandred was boasting about. Well, its here. Its here and its terrifying! Flaming Forsaken has channellers as well. Then there is Mazrim Taim. And Mat, oh Mat, fans of Mat will absolutely flaming love this book. He's here. He's here in more than half the book. Rand may have the shortest pages among the three. But we all know his is the most important one.

There are deaths. Burn you, but there are deaths. Jordan has saved all those in the last thirteen books only to finish them off in a heroic style here. So many deaths, so many lights extinguished, even the brightest flame of all. So be prepared folks. Be prepared.

It feels like the end of time. Now that the book is over, I don't see the pattern. The Wheel weaves as the Wheel wills. I'll simply have to move on. But its hard. It flaming hurts.

900 pages of action. The pace is flaming relentless. You couldn't have asked for a better way to finish the story. Yes, there will be questions. But the ultimate thing is that you'll be satisfied. More than satisfied. You will be awash with excitement and passion. One chapter is 190 pages long. And I can't wait for you to read that.

When Robert Jordan passed away in 2007 and Brandon Sanderson was asked to keep the flame burning, we had no idea we would see this day. Today, I want you to remember what Lan taught Rand all those years ago.

Death is lighter than a feather, duty heavier than a mountain.

And Brandon Sanderson has lit the brightest flame and saw us to the end. Thank you Sanderson. Thank you Jordan for the best days of our lives.

Let the Dragon ride again on the winds of time.

He came like the wind, like the wind touched everything and, like the wind was gone.
Posted by Freelancer at January 11, 2013
Email ThisBlogThis!Share to TwitterShare to FacebookShare to Pinterest
Labels: Brandon Sanderson, Fantasy, Freelancer, Robert Jordan, Series - Wheel of Time