A Case of Imagination by Jane Tesh 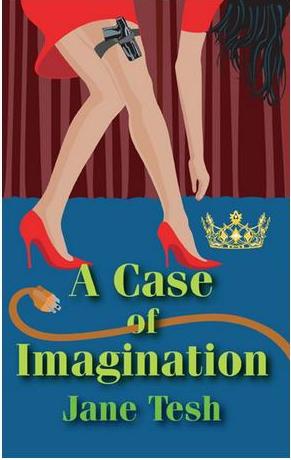 Impressions off the blurb:
A mystery of non-killing proportions escalates to a kill, and needs the protagonist detective to change her plans. The description terms it as a playful first mystery, but with a murder involved, I’m wondering how it can be playful as such.
My thoughts on the book:
I’m new to reading on a Kindle Cloud Reader. This is the first book I have read there, and I must say that the app makes it the reading seem easier than a PDF does. Oddly enough, I don’t have a payment option that lets me purchase Kindle books, so I had to start off with the free ones.
The protagonist is a freelance detective Madeline Maclin, who was a former pageant queen. She stays and works at Parkland, a town in North Carolina. Without a case to solve and having some time to spare, she agrees to go with her friend Jerry Fairweather to the neighboring town of Celosia where he has inherited a house from his dead uncle. Jerry is a self-proclaimed occult expert, who does séances and readings etc.
While at Celosia, the two of them see a parade before a pageant. There is also a protest against the pageant going on. One of the protesters suggest Madeline to investigate into some sabotage that has been happening at the pageant, since the organizer Evan James seems to think it’s their work. Madeline finds a case like that, and begins to look into Evan’s bad luck. Between pageantry recollections and investigations, there are also suggestions that there is the supernatural involved too. That brings Jerry’s interest in the story, and his girlfriend Olivia’s non-interest, as she tries to coax Jerry out of moving to the uncle’s house.
The light reading seems to be going well and the incidents seem to be just pranks played by bored kids of Celosia when the twist comes. The girl with the most odds to win the pageant is found murdered. The police warn the detective to stay away, but she continues. The new found attraction of Madeline to Jerry also brings a romance element into the mix. With twists and turns and new revelations, the protagonist appears to be getting herself into some danger as well, even in the usually dull town of Celosia.
Overall experience:
I can understand why the mystery would be called playful. It doesn’t seem to have a deep danger or series of murders and such. The language is simple, witty and direct. Jane Tesh mixes humor, seriousness and romance quite nicely, though there is no direction to one type. I don’t find that a drawback as such, esp. considering it as a playful mystery. I liked what I read. It’s very difficult to keep the flow and attention of the reader in an e-book, but the story wasn’t a drag and it kept my attention quite nicely, if not grabbing it completely. The characters are many, but endearing. The villain is unpredictable, the motive different. The ending somewhat leaves me wondering as to the future of the detective. I’m intrigued to know what lies ahead for her.
Rating: 7.5 / 10
Book Details:
Title: A Case of Imagination
Author: Jane Tesh
Genre: Mystery
Publisher: Poisoned Pen Press
Sold by: Amazon Digital
Price: Free (as of now)
About the author (as on book-page):
Jane Tesh lives and works in Mt. Airy, North Carolina, Andy Griffith's home town, a real life Mayberry. She is a retired media specialist and the author of five mystery novels, as well as numerous plays for children. When not writing, Jane plays the piano for productions at the Andy Griffith Playhouse and teaches aerobics at the local gym.
Reviewed by: Leo
Also for: Mixed Variety Challenge at ALOP, First Reads Challenge at b00k r3vi3ws.
Posted by Vinay Leo R. at January 29, 2013
Email ThisBlogThis!Share to TwitterShare to FacebookShare to Pinterest
Labels: eBook, Jane Tesh, Kindle, Leo, Mystery Novel, Poisoned Pen Press