Indian Mills and Boon anyone? Well, here is one! And what a grand book to lift my spirits. 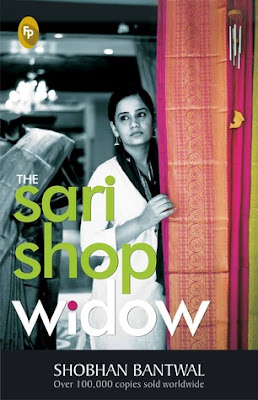 The Sari Shop Widow is the quintessential romance, with desi twist in a foreign land. It is the story of anAnjali Kapadia, leading a widowed life since ten years. She is a designer, and runs a tasteful boutique in New Jersey. She is married to her work, but complications enter her life when her business faces troubled waters and her dreams stand jeopardized. Problems intensify further when Anjali's father calls over his elder brother -Jeevan - to save her troubled business, the only problem being his brother's reputation as a dictatorial, shrewd and ruthless businessman. The series of shocks doesn't end here. Jeevan brings with himself a suave, dapper, half-British business partner - Rishi Shah - in the form of a business consultant to resuscitate Anjali's drowning boat. However, Rishi Shah enters Anjali's life as something more than just a business consultant. He revives that corner of Anjali's heart which had been purposely locked away to avoid pains of getting hurt over love. She is aware of his intense gazes, but she does not trust him. If anything, she hates him for having come suddenly into her perfect little world, and turning it upside down. She hates the fact that Rishi Shah will take away from her the only thing she had built since her husband's death - her boutique, her work.
In this atmosphere of extreme hostility begins their story. She hates him, distrusts him, but is aware of the tremors which stir her body when he comes near her. Rishi, on his part is smitten with Anjali, but has a tough exterior - steel in his eyes - which keeps his tenderness hidden from her. To make matters worse, Rishi has a girlfriend back home, with whom he has shared half a decade of his life. How does the notion of romance even enter the picture then? Well, I was left wondering too. But there is a reason why over 1,00,000 copies of this book have been sold. The reason is author Shobhan Bantwal's extremely engaging and sensitively developed narrative. Take my word  for it, she is an author under the effect of whose pen, you as a reader are absolutely secure. By the end you realize that investing your heart and emotions in this story was absolutely worth it.
I have a weakness for love stories which have an element of forbidden in them - something which doggedly opposes the consummation of true love. The Sari Shop Widow is a rather modern, easy going story for very long, but at the point where emotions raise their head, I had to stop and catch my breath. Anjali and Rishi are characters who come alive with force. You feel for them at each twist and turn in the story. You take sides. You pray for them. You just hope they come together with fierceness. That is what an intense love story should do to you. That is precisely what this book does to you.
The Sari Shop Widow was a wonderful read through and through. I have no qualms, not one, with this lovely romantic tale, and this hasn't happened in a long time. There are sub plots, stories running in the background, a subtle mysterious touch, and absolutely no loose ends. The author maintains a cool control over her narrative. You flow, and gladly so. The descriptions in the book are not run-of-the-mill. At times, all romances seem alike in texture. However, this book might lend that slight touch of freshness that the romance genre so badly requires. A widow. A middle aged businessman. Their encounter in the most adverse circumstances. Inevitable romance. Order this book, prepare a cup of coffee when it arrives, tuck into your quilt - and savour some smouldering romance to beat the winters. Its a 4 star book for me!