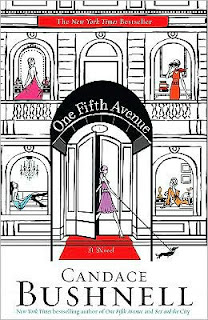 Synopsis (from the back of the book):
One Fifth Avenue, the Art Deco beauty towering over one of Manhattan's oldest and most historically hip neighborhoods, is a one-of-a-kind address, the sort of building you have to earn your way into - one way or another. For the women in Candace Bushnell's new novel, One Fifth Avenue, this edifice is essential to the lives they've carefully established - or hope to establish. From the hedge fund king's wife to the aging gossip columnist to the free-spirited actress (a recent refugee from L.A.), each person's game plan for a rich life comes together under the soaring roof of this landmark building."

This book is a modern-day story of old and new money, that same combustible mix that Edith Wharton mastered in her novels about New York's Gilded Age and F. Scott Fitzgerald illuminated in his Jazz Age tales. Many decades later, Bushnell's New Yorkers suffer the same passions as those fictional Manhattanites from eras past: They thirst for power, for social prominence, and for marriages that are successful - at least to the public eye. But Bushnell is an original, and One Fifth Avenue is so fresh that it reads as if sexual politics, real estate theft, and fortunes lost in a day have never happened before.

Y.Ahn.:
This was the first Candace Bushnell book that I have ever read. She wrote Sex and the City for all of you who don't know her, yet. It was a gift from a distant relative who saw it on the New York Times Bestseller list. I was reluctant at first to read it but I was in for a pleasant surprise. Many of you are probably rolling your eyes at me as soon as you see the words chick lit. However, Candace Bushnell writes in a sarcastic and witty manner. The story isn't a modern Cinderella story but rather the darker side of fame and fortune.

The story begins with an introduction to the setting and in one way the main focal point of this novel. The one thing that all the characters have in common is their home, the glittering building of One Fifth Avenue. The rich and famous live here as well as the people who want to be rich and famous. No one is afraid to claw their way up to the top.

My favorite thing about this novel was the fact that there were so many different characters. Sometimes, too many characters result in a haphazard story that doesn't flow well because the reader doesn't understand how all the characters fit together. In this novel, each character has a seamless way of zipping in and out of the central plot.

Schiffer Diamond is an actress who is beautiful, elegant, and graceful. She recently moves back to One Fifth Avenue for a TV show. Her old love Phillip Oakland lives there with his aunt Enid. Neither of them are sure where they stand with each other. Enid was friends with Louise Houghton who passes away due to a rainy accident. Louise and Enid's stepmother, Flossie, had a rivalry and Flossie was kicked out of the apartment. In the old servant's quarter, Mindy lives with her husband James and her son Sam. Mindy wants to move up on the social ladder but her husband is a "serious" writer who doesn't make any money. James has the same publisher as Phillip Oakland, who now writes screenplays. When Louise Hampton dies, Mindy is in charge of finding a new owner for her floor. Just to make sure that Enid and Phillip don't get their way, Mindy lets a new couple Annalisa and Paul buy Louisa's apartment. Paul makes a huge amount of money working for hedge fund king, Sandy Brewer. Billy Litchfield is an old man who enjoys living in New York and teaching ladies, like Connie Brewer, how to navigate in the world of the rich and famous. Lola is a girl from Atlanta who wants to be famous in New York. She gets a job as Phillip's researcher, only she's twenty years younger than him and determined to marry him. Lola befriends Thayer who currently writes for an online gossip blog but wants to be a serious writer.

Events connect all the characters together, like the discovery of a stolen cross necklace. Her characters are all so real because they all have flaws and mistakes haunting them. They behave like people which is sort of rare for chick lit. Don't get me wrong, I like reading about the girl who was swept off her feet by some billionaire she happened to meet coincidentally. One Fifth Avenue was different because it was so unpredictable. Candace Bushnell is such a meticulous writer. She draws you in little by little until you are so rapt around the novel that you have to finish it. One thing that I really enjoyed was the fact that she remembered all the little details. They reappear again and you just have that sinking feeling of dramatic irony for these characters. The characters all know each other by mutual connections but it makes sense that they know each other because Bushnell provides a concise history of each character. There is no sugarcoating and One Fifth Avenue captures the essence of the New York scene. I definitely recommend it to anyone who wants a different type of chick lit.