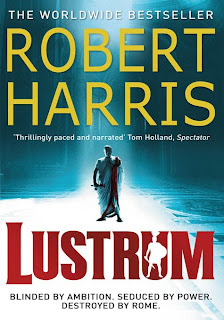 ROME, 63 BC. In a city on the brink of acquiring a vast empire, seven men are struggling for power. Cicero is consul, Caesar his ruthless young rival, Pompey the republic's greatest general, Crassus its richest man, Cato a political fanatic, Catilina a psychopath, Clodius an ambitious playboy.

The stories of these real historical figures - their alliances and betrayals, their cruelties and seductions, their brilliance and their crimes - are all interleaved to form this epic novel. Its narrator is Tiro, a slave who serves as confidential secretary to the wily, humane, complex Cicero. He knows all his master's secrets - a dangerous position to be in.

From the discovery of a child's mutilated body, through judicial execution and a scandalous trial, to the brutal unleashing of the Roman mob, Lustrum is a study in the timeless enticements and horrors of power.

“Surely the greatest mercy granted us by Providence is our ignorance of the future. Imagine if we knew the outcome of our hopes and plans, or could see the manner in which we are doomed to die - how ruined our lives would be! Instead we live on dumbly from day to day as happily as animals. But all things must come to dust eventually. No human being, no system, no age is impervious to this law; everything beneath the stars will perish; the hardest rock will be worn away. Nothing endures but words.”


FL Speak - Lustrum is beautiful. Its stunning. Its full of power, vice, corruption and greed. Its ROME!

Lustrum is the sequel to Imperium which I had no idea about and which I didn't read. However the good thing is you can read the 2nd book even if you didn't read the first. But, do read the 1st one, before you die or the world ends (whichever is earlier).

Lustrum : (noun), a period of five years.  Lustrum depicts the next five years of the life of Cicero and his servant Tiro after he is elected consul.

Rome is full of power and wealth. While the wealthy are cunning, the poor has no champion. And the only just man there is, is Cicero. The long standing enmity between Cicero and Julius Caesar was worth reading. Oh Caesar is famous now. He was also the most manipulative, power-crazy megalomaniac ever that brought the Rome on the brink of destruction.

The author firmly states that Lustrum is a tale of fiction. However, you do wonder where the thin line between fact and fiction dissolve.

Coming back to the story, as soon as Cicero is consul, Caesar and his friends start brewing trouble. Cicero knows that Caesar is the most dangerous of them all, but without definite proof he's powerless to act and Caesar is simply to wily to get caught. When a child's mutilated body is discovered and it is realized that a human sacrifice was done and an oath made to murder Cicero, Cicero knows that he needs to move fast.

With only the gift of being a wonderful orator, Cicero foils plans of Caesar and Catilina time and again. With the passing of time, the adversaries grow stronger and plans bolder. And only with a sharp mind can Cicero save the republic from descending into tyranny. And if Caesar has his way, the entire world would crumble.

Page after page of excitement, Lustrum never fails to amaze. And when Cicero has finally defeated Caesar in the courts, he breathes a sigh of relief as Caesar apparently has given up on his quest. Instead Caesar moves away to the border to lead Rome's army against his enemies. But the time for stability has only started when after a year Caesar returns being ever-victorious in the field and with much more power. With Caesar being consul, the laws that Cicero managed to implement started shifting.

And then Cicero's friend and Rome's greatest general, Pompey returns. But is he still the same friend or is he back because of Caesar, that my friends, you need to read to find out. As Cicero's fame wanes and Caesar's grows, the enmity between the two increases.