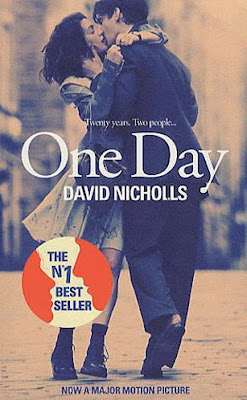 YOU CAN LIVE YOUR WHOLE LIFE NOT REALISING THAT WHAT YOU'RE LOOKING FOR IS RIGHT IN FRONT OF YOU.

Emma and Dexter meet on the night of their graduation. Tomorrow they must go their separate ways.

So where will they be on this one day next year?
And the year after that?

And every year that follows?

EXCERPT - ......Emma composing long, intense letters crammed with jokes and underlining, forced banter and barely concealed longing; two-thousand-word acts of love on air-mail paper. Letters, like compilation tapes, were really vehicles for unexpressed emotions and she was clearly putting far too much time and energy into them. In return, Dexter sent her postcards with insufficient postage: 'Amsterdam is MAD', 'Barcelona INSANE', 'Dublin ROCKS. Sick as DOG this morning.' As a travel writer, he was no Bruce Chatwin, but still she would slip the postcards in the pocket of a heavy coat on long soulful walks on Ilkley Moor, searching for some hidden meaning in 'VENICE COMPLETELY FLOODED!!!!'

FL Speak - One Day has to be the one of the best books I've read so far. Its amazing, its witty, its tragic, its unputdownable.

Meet Dexter and Emma. Emma and Dexter. Its 1988, Edinburgh and its graduation day. A one-night stand and a year later....

Emma is phenomenonal. She is downright hilarious, always stuck in a job she hates, while keeping her feelings for Dex with herself. Dexter is the playboy. New city, new girlfriend/s but always in touch with Em, because he can be totally himself when she's around.

Every chapter is 1 year later on the same day. We still know that Em and Dex are still in touch but life never stops for them. he is whoring around, high on alcohol and drugs and she's in a stable relationship with Ian, a guy she met when she was working in a Mexican restaurant. And in between their regular lives, they're still friends, still meeting and sharing secrets, still naive to the love that they for each other.

And then, as in every other relationship, they go through the "rough patch" *notice the double quote* Their friendship crumbles, Em goes through a bad phase, Dex goes through a much darker phase and bam! A couple of years later, Dex gets someone knocked up. He's in love. He's married. She's cheating on him and Em is his anchor. Em is his port on the storm seas. Em is his incredible better half.

A couple of years later, they realize, hell...they love each other! *bloody hell, I was telling you that from the first chapter itself*

But love my dears, is never always perfect. And tragedy had to strike.

And then there's that amazing letter Dex wrote while he was drunk. And then lost it when he met someone at the bar and had to run for another quickie. But what happened to that letter....I'd let you guys find out about it.

But all in all, this is a mega-awesome book. There is also a movie with Anne Hathaway, which am downloading at the moment. If you're looking for a romantic comedy novel, that's not Nicholas Sparks-esque, that's not a tear-jerker but something which is funny, touching and soulful, pick this up. You won't regret it.

“You're gorgeous, you old hag, and if I could give you just one gift ever for the rest of your life it would be this. Confidence. It would be the gift of confidence. Either that or a scented candle”

“you feel a little bit lost right now about what to do with your life, a bit rudderless and oarless and aimless but that's okay that's alright because we're all meant to be like that at twenty-four.”

“Call me sentimental, but there's no-one in the world that I'd like to see get dysentery more than you”