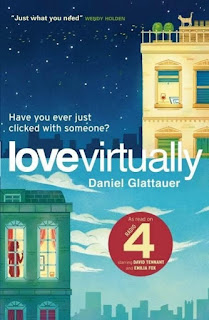 A dear friend of mine told me about this book and since then I been trying to get my hands on this one. Luckily , the same friend gifted me this last week.

To say , I loved this book would be less.
I kind of lived this one.

The book has the perfect tagline : "Have you ever just clicked with some one?"

I know a lot of people on blogging and other social media have. in N possible ways. but falling in love with some one's words , via emails / long messages ?

If you are the kind of person, you sure know why I lived the book.
why is it that you can act yourself , act so freely at times with strangers without knowing you are acting different than usual. How does some one whom you have never met or even know might be lying to you become so important that you want to forget that you have a family.


"Write to me Emmi. Writing is like Kissing, but without lips. Writing is kissing with the mind."


And the spontaneous , bubbly  Emmi loves to write.
She loves writing to Leo as soon as they begin having a conversation.
Leo loves Emmi's emails. He loves the way she thinks and the way her emails are without any filter. Of course Emmi writes this way and talks this way only with Leo.


Love virtually is an Epistolary Novel that is solely written as emails between Emmi and Leo - from the first wrong one to the last long one.

There is fun , love, friendship , jealousy , possession , wit , intelligence and a sweetness to the emails. The language is casual and yet sophisticated. The dialogues are clever , sensitive and appear genuinely personal as you read them.

I’m thinking of you a lot, in the mornings, in the afternoons, in the evenings, at night, in the periods in-between and just before and after – and also during.

and for those , who wonder if such relationships are possible and how long , I say its all where you put your trust and how long.

The end might shock you a bit.
As for me , the wait for the sequel has begun !


This is the German book cover. I later found out the book title means "Against the north wind" And you would understand it only after reading the book. North wind has such a sweet episode in the book between Leo and Emmi