'The Krishna Key' by Ashwin Sanghi. 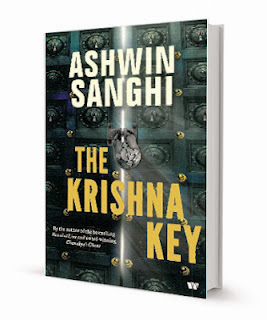 "Five thousand years ago, there came to earth a magical being called Krishna, who brought about innumerable miracles for the good of mankind. Humanity despaired of its fate if the Blue God were to die but reassured that he would return in a fresh avatar when needed in the eventual Dark Age - the Kaliyug. In modern times, a poor little rich boy grows up believing that he is that final avatar. Only, he is a serial killer."


For someone who hasn’t read a lot about and of Indian mythology, this book was not only a really interesting read but also an eye opener!

The extremely beautiful way the author Ashwin Sanghi has merged the past with the present, the way he has woven the whole story around something that had happened, at least on paper, is just enthralling! I particularly liked the starting paragraphs of each new chapter. The writing is simple, lucid, to the point and even though there is a lot of drama, it is interesting, not over the top.

This book sucks you in, it pulls you. You don’t want to put it down, or take breaks. You want to just sit in a chair and finish it RIGHT NOW! I loved loved LOVED the sharp twist it took. I hated it, but loved it at the same time.

“Priya had the habit of playing the devil’s advocate in order to analyse a point, even if she was in agreement with the hypothesis”  (Pages 11&12)

This is me. :D I do this a lot at times. Not because I want to trouble somebody or like it’s said, don’t believe or agree with the hypothesis, but I like to take the side which is, well not being taken up by someone else to put it simply!

The whole land reclamation concept that has been explained through pages 67 to 70, left me fascinated. Whether you believe it or choose not to, it still is amazing. Undeniably.

“The word omniscience means infinite knowledge. It starts with the sound of Om or Aum. The word omnipotent which means a person who has infinite powers also starts with Om.  The word “omnivorous” which implies the ability to absorb everything also has Om as the starting point. The word “omen” implying a predictive sign of a future event, also has Om in it. A trusted intermediary between parties, with the authority to award a verdict, is called an “ombudsman” – once again we have Om. Om is an expression of divinity and authority and that’s the reason why Aum is to be found even in the Christian Amen and the Islamic Amin.” (pages 161&162)

I knew Amen/Amin are similar but I never thought about it from the omnipotent/omnivorous angle. So I enjoyed reading this paragraph in particular!

The only mistake I found was the spelling error on page 95, of Mahatma Gandhi.

I met this aged uncle on the bus, who was about to get off but saw me reading this book and started talking about how fascinating it was! I was pleasantly surprised, half the bus was staring at the two of us. :P
Till the time we reached his stop, we were gushing about the twist and the facts and everything!

Final Verdict : 3.7/5
The book is an excellent, engrossing read. The author has done tons, and that I literally mean tons, of research, there are 11 pages of just research acknowledgements. But why I loved this book is it does not tell you history, or just throw facts in your face, it is a story.  I am so tempted to leak out some things, I'm barely containing myself! And it's only 3.7 because in my opinion, maybe since I am not used to reading such books, I found the start a little dull and slow.
On the whole, it was really engaging, thoroughly and well researched and made me sigh when it ended.
But in my opinion, the build up was far more intense than the actual climax.