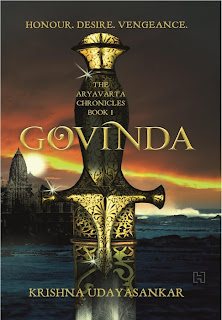 Title: The Aryavarta Chronicles: Book 1: GovindaAuthor: Krishna UdayasankarPublisher: Hachette IndiaISBN: 978-9350094464Genre: Fiction, MythologyPages: 472Source: PublisherRating: 3/5
The fact more or less of the Indian Literary world is this: Authors are getting back to their mythological roots and churning out the so-called, “bestseller of the year”. Everyone seems to be at it, and it does not end at one book. It has to but of course be a trilogy. The Gods would be pleased. Right from Shiva to Vishnu to Brahma to Rama are featured and much ground is covered. What then also tends to happen is that one or more writers often write on similar Gods and similar epics – ranging and sticking only to The Ramayana or The Mahabharata.
Coming to the book I am reviewing – “The Aryavarta Chronicles: Govinda (Book 1)” by Krishna Udayasankar. Going by the title, one can easily predict, the content of the book. The book is but obviously centered on Krishna – one of the many avatars of Lord Vishnu. The story though seems to be predictable, it actually isn’t so. May be that is what makes it different from the others in the running. Having said that, there are times when the interest did not manage to be sustained by the writing.
Now to the plot: We are introduced early on to the Firstborn dynasty of scholar-sages, descendants of Vasishta Varuni, who are also the protectors of the Divine Order on Earth. They are the ones who have been ruling the planet and controlling its working. On the other hand, you have the Agnirasa family of Firewrights, weapon-makers to the kings and master inventors, who have taken the step to defy the Firstborns. This rises to a conflict, leading to the united empire of Aryavarta falling apart. If this was not enough, then one of the Firewrights is dead, and that too a Secret Keeper, killed by a violent hand.
There is an evident bloody conflict. There is only one person who will save them all. That person but of course is Govinda Shauri, a cowherd-turned-prince and now Commander of the armies of Dwarka. The question that arises is that: How will he save Aryavarta? At this point in the book, the characters of the Mahabharata get introduced (they are known earlier on, but the part they will play gets clearer at this stage) and that is how the entire Book 1 gets looped in and reaches its logical end.
The plot did seem a little mundane when I started it, but the minute it picked pace and everything fell in place, it was something else. The characters are well developed and like I said, they make perfect sense at the end and the reasons why they are there in the book. The writing is crisp at times and at others, I thought it was a drag. Having said that, the book is quite charming and the mythology angle to it is superbly done. I for one will wait for the 2nd installment in the series.
Posted by Vivek Tejuja at September 15, 2012
Email ThisBlogThis!Share to TwitterShare to FacebookShare to Pinterest
Labels: Book 1, Fiction, Govinda, hachette india, Krishna Udayasankar, The Aryavarta Chronicles