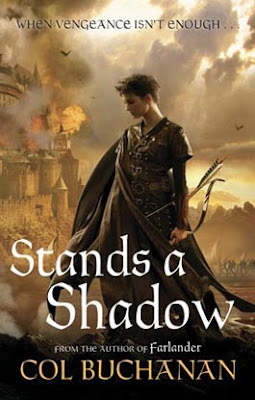 Book 2 of 'Heart of the World'

SYNOPSIS - Riding at the head of her army, the Holy Matriarch of Mann plans to conquer the fortress city of Bar-Khos, whose walls have held the empire bay for ten long years of seige.

Ash is a man who would see her dead before that. The ailing Roshun assassin is determined to seek vengeance for the Matriarch's previous crimes. But such a course of retribution goes against everything his life has taught him. Meanwhile, Che, a trained killer of the state, watches as the Mannian army slaughters its way across the remnants of the free world, and questions whether he believes the doctrines he has been trained to follow.

With the battle for the Free Ports intensifying, more lives are drawn into the bloody conflict: Bahn, the siege-shocked soldier; and Curl, a young woman determined to make a stand even if it costs her her life. When the two armies clash all looks set to be decided. But sheer force alone will not be enough to win this war. Only the gruelling determination of one man seeking redemption could sway the final outcome.

FL Speak - I guess you're over the death of Nico in the first book. Nico, who I naively believed to be the hero of the series, is dead and his teacher, the Roshun Ash, is bent on revenge which goes against his Roshun ways.

Ash is old. I mean, for someone over sixty, being an assassin doesn't come easy and he knows he's dying. But revenge is plain on his mind. Revenge against the Holy Matriarch of the Mann Empire.

What began in Farlander is about to come to a conclusion. The Mercian port of Bar-Khos, which has doggedly stopped the Mann army outside its walls for the last ten years are about to be overrun. Because the Holy Matriarch has determined that Bar-Khos has to fall now for world dominion by the Mann empire. And Ash is behind enemy lines, intent on revenge while carrying a guilt.

Surprisingly, the hero of the story is not quite Ash. Its Che, Curl and Bahn. Che is the Imperial Ambassador to the Holy Matriarch with a duty heavy on his mind. For he has been told to assassinate the leader of the Mann if she proves to be weak in the face of battle. And the poor lad has trust issues at the moment.

When the enemy arrives, the much awaited battle begins. Bhar-Khos has some aces up their sleeves as well and even the mighty army of Mann might falter unless they're prepared for the dreaded Bar-Khos Armada.

And when Che finds Ash near the women he's protecting, hell breaks loose. Now he must decide his next step. And the next step may be everything between winning and annihilation.

There is a huge, huge surprise in the final pages. Buchanan does know how to weave a tale and make you wait for the next book. The war scenes looked extremely realistic, and it did made me wonder if I somehow fell into a Malazan battle without the mages. How will the series move forward from now? I have absolutely no idea. And that what makes it all the more interesting.

The Roshun are changing. For the good or for their doom? It remains to be found out.

PRICE - INR 350/-
Posted by Freelancer at September 08, 2012
Email ThisBlogThis!Share to TwitterShare to FacebookShare to Pinterest
Labels: Col Buchanan, Fantasy, Freelancer, Series - The Heart of the World