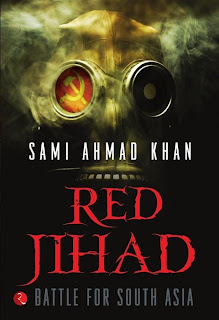 
Reviewing books has become a constant source of pleasure in my life, and it is now earning me some precious acquaintances too. I first found out about ‘Red Jihad’ via Twitter and immediately offered to review it. It is hard to ignore a book whose title has the words ‘Red’ AND ‘Jihad’ in it. The author, Sami Ahmad Khan, sent me a personal copy when the publishers delayed. Facebook friendship and a treasured camaraderie ensued, but that is a story for another day. The hero of this blog post is Sami’s debut novel, ‘Red Jihad: Battle for South Asia’.

‘Red Jihad’ revolves around an idea that is too eerily real to be thought of entirely as fiction. Set in the very near future (2014), the basic plot is about a coalition between Pakistani Jihadists and Indian Naxalites for a terror ploy, and an ensuing war between India and Pakistan. Yes, shudder! Indian Naxalite Agyaat ties up with Pakistani extremist Yasser Basheer to hijack the Indian experimental missile, Pralay and use it on India, thereby deflecting the government’s focus from the Red corridor. But when the missile intriguingly changes course and lands on Lahore instead of Delhi, the consequences change drastically. Pakistan wages war against her neighbor despite the Indians pleading innocence and the possibility of a nuclear war looms large.
Other nations get involved and political conspiracies abound, deepening the quagmire…

‘Red Jihad’ is a powerful debut novel with an intriguing storyline, but it is not without its flaws. Throughout the book, I kept getting the feeling that the author is trying hard to write like someone else, to emulate a style. His voice does not quite sound his own. The writing is jerky in places, the humour, a little awkward and the metaphors, a tad forced. But then, these are all souvenirs from a first.

However, this first is also page-turner. ‘Red Jihad’ keeps you riveted throughout, with the ping ponging action between strategy rooms of the Indian and Pakistani military. Now the missile’s on its way to Delhi, now it’s on Lahore. Now a general is barking orders to start war, now a prime minister is saying no. It is an out and out guy novel (yeah, I’m sexist alright), and I can almost imagine the glee on Sami’s face as the plot took shape in his head and his pen gave it life. Guns & fighter planes, tanks & submarines, good guys & bad guys – the book has all that a creature of testosterone will want. The writer even goes to great lengths to describe the names and makes of the weapons, but it often seems unnecessary. The means of war sometimes take precedence over the ends.

But that’s not to say that the book is lacking in its message of hope and humanity. More than once in the book, Sami makes the reader take a hit from a bomb or a bullet. Or he leads the reader by hand to an improbable though not impossible situation where a Pakistani soldier and an Indian army man are building a warm solidarity. Sami tries to give shape to the dream of friendship between the Indian and Pakistani nations – the kind of message this generation needs to grow up hearing. Read it.