MOTTO : First in, Last out.

SIGIL : a silver brooch: a bridge of stone, lit by ruby flames. 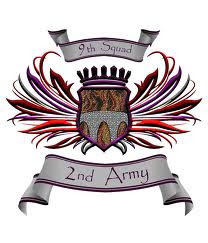 FIRST SEEN AT : Gardens of the Moon (Book 1 of The Malazan Tale of the Fallen)

The Bridgeburners were transformed in the Holy Desert Raraku, in Seven Cities, from being regular soldiers to becoming much more. The unit has had a combat role in military operations on the continents of Seven Cities, Genabackis, and Quon Tali. The unit was merged from the remnants of several units and was forged into a single force through their journey across the Holy Desert of Raraku. Their pasts were then burned away. 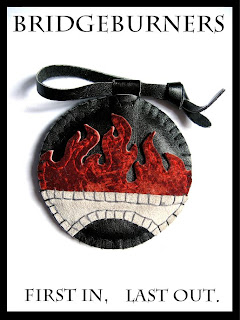 Shortly later, Dujek Onearm and a couple of armies of the Malazan were outlawed by the Empress. These armies merged together to what became to be known as Onearm's Host. Dujek appointed Whiskeyjack to be his second in command and Paran took over the rest of the Bridgeburners.

In the City of Capustan, the Bridgeburners went ahead of Onearm's host to try to take over the city and make way for the army. They survived without losing anyone. Their final mission was not to be so simple. Charged with the elimination of the Pannion Seer, the Bridgeburners faced heavy losses when they were attacked by the undead K'Chain Che'malle Kell hunters.

In the aftermath of that devastating battle, only a few survived. The bodies of the Bridgeburners who fell, along with Whiskeyjack were placed in Moon's Spawn, the flying fortress of Anomander Rake, one time enemy of the Malazan during the seige of Pale. Anomander sent the flying tomb into the sea to fall and sink to the ocean floor.

The surviving Bridgeburners, who were reduced to less than 10, were officially logged as dead by Dujek Onearm and were retired to Darujhistan for their unending bravery. The time had come for them to rest.

Ganoes Paran, following the aftermath of the Battle of Coral, blessed the Bridgeburners, both living and dead. The dead Bridgburners ascended. Ganoes Paran created a new card in the Deck of Dragons for the Bridgeburners. It was called the Guardians of the Dead, in High House War.

There....That's the tale of the legendary Bridgeburners. Steven Erikson created a unit you fell in love with only to have them killed. Authors are heartless sometimes.

I'm attached to this army. Yes, I am. I may not give a damn about Malazan, but the Bridgeburners, I fell in love with. These guys are nuts! They're comprised of those crazy sappers who loves playing with those equally crazy Moranth ammunitions, saboteurs and what-nots. And if you think my heart broke during the siege of Pale, or when Tattersail died, imagine how devastated I was when Whiskeyjack died and when the rest of the Bridgeburners fell one by one. OH DAMN YOU ERIKSON!

'They were of a kind, then
the histories writ large
in tattooed tracery
the tales a tracking
of old wounds
but something glowed hard
in their eyes – those
flame-gnawed arches,
that vanishing span,
they are their own past
each in turn destined
to fall in line
on the quiet wayside
beside the river
they refuse to name . . .
The Bridgeburners'