In May I read Upendra Sahni's Love Cocktail and read a few of his interviews online. There was a desire to be given a chance to ask some of my own questions. And I am glad he gave me that chance himself. Over the last one month, emails were exchanged ( quite delayed ones from my side) and here is the result for all : 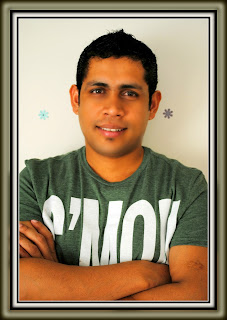 Q.  First thought any one would ask you is, who was the inspiration for the book?

A: - My family and friends have always been my source of inspiration in everything, be it writing or anything else.

Q. I would want to know which character do you identify the most with?

A. Of course it’s Raj, though there are few fictions spiced up in the novel otherwise you will find Raj within me completely. My thought is mostly matching with Raj.

Q. Why the name "love cocktail" . Oh that reminds me, now we have a movie by the name cocktail .. you watched that ;) ?

A. Yeah, I have watched Cocktail. It’s a nice movie. I wish it would have named as “Love Cocktail” J. About why “Love Cocktail” title. To be honest selecting the title for a novel is the toughest job of every writer, because that’s what everyone will read first. That’s the word you will utter everywhere. So your title must be interesting enough to prompt readers to pick your book from the shelf. Again the title should define your entire story as well. It’s kind of defining entire 50000 words in just two to three words only. I had around 10 suitable titles for my book and from the list “Love Cocktail” is the one which most of the friends liked.

Q. So what other title came close to being picked if not this one ??

A. The few others were “Love Traffic”, “Ripples of Love”, “How it happened”, “Passion, Emotion and Frustration life redefined” like this

Q. One real incident that you narrated in this book?

A. Most of the incidents in the book are real. Only very few parts are fiction. For e.g. the incident where Rohan tied the Coach’s leg with rope to trap Rahul and Razik is true.

[ That was one of my fav actually .. really had a good laugh ]

Q. Whereas I felt the debate between the lead characters was interesting on many aspects , and quite a well written one ( I would have won an award in school for that :D ) , did you not feel it was a little too long ? that it might put off few readers ?

A. Yes, I was. Many times I thought of removing the entire debate. But then, reservation is a big unaddressed issue we have right now and I decided to address it via my novel. After the book launch I have asked many readers if the debate part was boring or too long. But good thing is everyone appreciated the debate part. In fact few have commented the debate part as the best part of the novel. So I am relieved now J

Q. Why not a fairytale / a little dramatic ending for the book ? At least I felt that in spite of those heroic sort of acts in college, ultimately no one was as famous in real life. Successful yes, exceptionally , not. Why that way?

A. I liked this question and kind of tough to answer J. See, my focus was to keep the story as simple and as natural as possible so that readers can relate themselves to the characters. They can visualize their college days via the incidents. About why the characters aren’t exceptionally successful. All the lead characters are alive so you never know tomorrow they could become famous J finger crossed.

[ ah ! that’s a really good thing . We would wish and hope the same. Maybe we would read about them again in another story ]

Thanks for the good wish..

Q. How do you manage a Career in software industry and writing ? Ever felt like quitting from one to pursue other?

A. It was easy. One is my profession and other is passion. So I used to write after office hours and mostly during weekends. On many occasions I have written until dawn, especially Friday and Saturday nights. It would be hard to leave one to pursue other. At the day end I have to meet my family's basic need.

Q. who was the first one in your life to read your work ? did you write shot fiction / blog / poetry before this novel ?

A. My wife and I must admit that she had given valuable comments. Yes, I used to write short stories and poems but in oriya. Blogs I have started recently in my own website http://upendrasahani.com.

Good Luck Upendra. It was a pleasure knowing you bit more.
Posted by Pratibha at August 11, 2012
Email ThisBlogThis!Share to TwitterShare to FacebookShare to Pinterest
Labels: author interview, Upendra Sahni