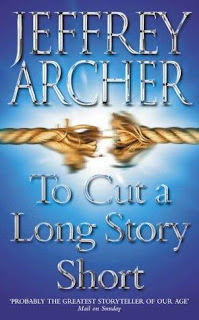 Last evening, I was roaming in one of the markets of my city where I spotted a shabby shop. I went inside and saw it had books everywhere. Old and new both. It took me seconds to figure out that the shopkeeper is selling old books at 50% price and there were hundreds of books lying around. Yesterday itself, someone from twitter suggested me to read short stories by Jeffrey Archer after reading my review of "Only Time Will Tell" and also suggested me this title "The Twist in the Tale" but I forgot it and picked up "To Cut A Long Story Short" for mere 100 bucks in a superb condition and I am glad I did that.

The first story of the book is named as "Death Speaks", which has been translated from Arabic. Jeffrey was so moved by the story that he has placed it in the starting of the book. He has confessed this thing in the preface itself. Apart from this, the book has another 14 short stories namely ( the ones based on real life incidents have been written in italics)

1. The Expert Witness
2. The Endgame
3. The Letter
4. Crime Pays
5. Chalk and Cheese
6. A Change Of Heart
7. Too Many Coincidences
8. Love at First Sight
9. Both Sides Against The Middle
10. A Weekend to Remember
11. Something for Nothing
12. Other Blighter's Efforts
13. The Reclining Woman
14. The Grass is Always Greener

All the short stories have one thing in common, sudden twists and turns that would surely jolt you. The first two stories of the book namely Death Speaks and The Expert Witness, I had to read them twice because the language is so tricky that if you miss out on something, the story would sail over your head.   But after that, I read all the other stories with patience and word by word. And I would advice the reader of the book to do the same.

My personal favourites from this collection is, The Expert Witness, The Letter, Too Many Co-incidences, A Weekend to Remember and The Reclining Woman. I wont discuss the plots of these stories here but I highly recommend this book if you like intelligent and sly fiction.
Posted by Yatin at August 28, 2012
Email ThisBlogThis!Share to TwitterShare to FacebookShare to Pinterest
Labels: Fiction, harper collins, Jeffrey Archer, Short Stories, Yatin Gupta