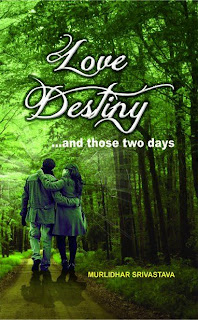 He loves her intensely.She loves him deeply. Does she…? ? ?One evening she walks away, walks away without answering a word to him. Twenty-two years later, they meet accidentally in a mall, when both have some grey hairs and few wrinkles on their faces.What could happen in just two days? The question kept on haunting Mayur despite best efforts to forget. And Shobha…. did she manage the twists & turns of destiny correctly… ???Was Chandani, wedded after a perfect match of horoscopes to a well settled boy from a premium institution, able to pull off her marriage?Did Verma aunty, who always lived in tears when her only son settled permanently in US get the care and attention in the winter of her life?Astro predictions, horoscope, belief – how far one should go in believing on these? Does over belief weaken one's ability to rationally look at a thing or a problem? A Mystifying Saga of Love, Betrayal & Belief.


(Review Requested by the Author)

She looked at her watch and said, “I’m getting late. My husband had phoned me to pick me up from here. I will go now, Mayur.”

Mayur heard his name in the conversation for the first time. He said, “Okay, and thanks.”

“Talking to me,” he said and continued, “Generally every Monday I come to this mall in the afternoon.” He himself could not understand why he said this. She did not give a reply.

You know how every other story seems to be about two people who met in college, fell in love, broke up and blah, blah, blah? I was really tired of those novels even though I still wouldn’t mind reading short stories based on a similar theme; which is why I was tempted to read something different this time round, and this book certainly is ‘different’.

“Love, Destiny... and those two days.”  The title instantly caught my attention. And yes, that was mainly because I was eager to know what happened on ‘those two days’.  But more importantly, I liked the idea of reading about two people who were in love, accidentally meeting years later; and all the drama that comes with it- the surprise, the tension, the embarrassment, the confusion and of course, The Consequences.

On the whole, this is a story about love and separation.  But there are several other themes that come into play as well. The most unusual concept that the plot revolves around is the role of destiny in our lives. It’s not just about accepting Fate, though. Here we have a heroine who is a staunch believer of the idea that the positions of the planets affect our lives.  Shobha has cent per cent faith in the authenticity of horoscopes. She even checks the predictions in the morning paper and plans her week accordingly. I know many of us do the same, even if it’s just for fun. I for one really enjoy looking up the characteristic traits of different sun signs; it’s thoroughly entertaining, I tell you.  But coming to the point, this girl is absolutely obsessed with star charts and such, to the point of being a little deluded.

Typically, the guy has no interest or belief in these things. While most readers would be tempted to think along the same lines as Mayur, and be glad to know that he is mostly right, it seems a little odd that there are very few things that happen according to the horoscopes that Shobha keeps a track of. The best part of the story is the influence of her obsession with them, which marks the finale, making the conclusion impressive and surprising. Thank GOD the novel does not have a stereotypical ending and the real reason behind the break up is not actually what it seems to be all along.

The curiosity about what causes the break up keeps you reading until the very end when Shobha finally reveals the truth. The author has done a fine job of portraying the maddening torment associated with not having closure. One cannot help but sympathize with the protagonist’s helplessness and frustration at not knowing the reason behind the break up. The worst possible thing anyone can do is walk away from someone’s life without telling them why. Mayur does manage to move on with life and tries to give his best to his career and family. But it’s obvious that life could have been much better had he not been baffled by the mystery behind Shobha’s sudden, inexplicable change of heart during ‘those two days’.

The most endearing character in the novel, funnily enough, is Lata- Mayur’s wife. One does not initially give her much thought; at first, she comes across as the ideal wife, ideal daughter-in-law, and ideal mother who keeps lurking in the background with nothing much to say. However, as the story continues, she turns out to be a fun loving woman who is actually a perfectionist- she might not go to out to work, but she takes her job as a homemaker seriously. She is someone with passion for life. Lata is romantic and intelligent, she is impish and smart. In fact, it’s much easier relating to her than to Shobha, who might be the beautiful and loving heroine but whom you do not really feel like you know personally.

The sub-plot focuses on Chandani, Mayur’s younger cousin whom he dotes on, and the Verma family which includes the old couple and their son Sandip who has moved to the US with his wife and daughter and hesitates to return. Here, the author brings into perspective the different issues associated with arranged and love marriages, respectively. Although I wish more details would have been provided about Chandani’s conversation with her prospective groom and what kind of expectations she herself had from the marriage, it was nice to see that her character becomes more appealing towards the end, when she begins to speak up for herself and takes a stand.

The novel has a ‘feel good ending’ but the climax is totally startling, because of an unexpected turn of events that gave it a filmy touch without even being melodramatic.  All in all, it’s a pleasant read.