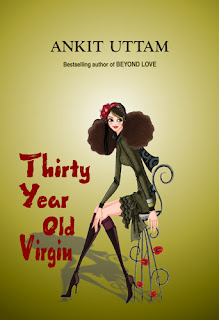 She duped him into kissing her when they were five. Don’t judge her, she was curious.
He tried to finger her when they were thirteen. Forgive him, he was delusional.
Her boyfriend took revenge on his first day in college. And his attempt at fingering wasn’t even successful.
She knows, his heart is in his pants.
He saves her from goons and she stabs him on his heart as a token of gratitude.
She dumped her last boyfriend when they were making out. And he didn’t come after that… for a few weeks.
He dumped his last girlfriend and found a boyfriend for her, the same night. Heart of gold.
He hates dogs. She has a dog by his name.
Childhood friends. Childhood enemies.
Hate, the single common thread between them.
If he would be the last guy on this planet she will prefer to preserve her virginity till eternity.
If she would be the last girl on earth he will prefer to die eunuch.
They meet again.
Still share the same bonhomie.
But now they have another string binding them. Their hate has another companion.
They don’t want love but they miss sex. Love is anyways overrated.
Opposite poles, as they are, they know they can never fall in love.
She proposes a no holds barred physical relationship. He agrees but with caution. Which guy in his right frame of mind wouldn’t?
But it wasn’t long before they realize that each of them wants something more than the other is willing to give.
Meet Maya, the freak. She is a diva, the sparkling wine. She is unpredictable. She is fearless. She is a monster. A psychotic bitch.
Meet Arnav, the geek. He is the dude, the gifted one. He is emotional. He is a jerk. He is a manipulator. A bona-fide pig.

Swarnali Speaks : Under a deceptively simple cover is a book which is not so straight and simple. I was not really happy with the cover when I saw it first but then I realized that the name of the book is more than enough to raise brows everywhere. I had to think of a million ways to hide this from my parents' eyes. A not so bold cover helps in the camouflage process. :P You’ll know the aptness of the book’s name only when you reach the last page.

Coming to the book, the plot is a basic friends with benefits plot. But the approach is quite different. I really appreciate the author's boldness in approaching the subject of sex, especially in a conservative country like ours where even love and relationships are not expressed and talked about with ease. But when I say bold and the use of sex as the plot propeller, I do not mean that this is erotica. The first chapter does give an impression of it being so (which is basically an attempt to catch the reader's attention), but the next chapters will remove the doubt.

The main plot concerns the lives of the suave and sweet Arnav, the geek with the most unusual marketing ideas and Miss Bold and Beautiful, Maya. The narrative swings from the time the two were 5 year olds to the time when they are students at IIM Bangalore and then to the present, when both are business personnel. Apart from Maya, all the other characters are quite believable. I really loved the portrayal of the conflict in Ronnie’s character. Maya seems a bit too exaggerated. Her escapades with Ronnie seem a little unnecessary sometimes. The author's appearance in the book as a character was really funny, especially the part with the pun on his surname.

The narrative is quite pleasant and usually in the repartee form, fast moving witty dialogues. I loved the fact that the book did not have a single grammatical error (at least I didn't find any) which is a breath of relief from the contemporary Indian novels which are riddled with errors of all kinds (I don't mean any offence to other authors; I blame it on the editors and proof readers). The book begins really well and the pace is good and keeps the reader turning pages but eventually towards the end of the book, it somehow gets a little slower. Am including an excerpt from the book which I found particularly funny-

“Jail…penitentiary is jail, Mahatre. Tomorrow get one aaksfard.” Inspector was sweating profusely and it seemed to rob him of his cheerfulness if any.
“Aaksfard?”  ’

Now if you haven’t yet deciphered what “aaksfard” means, it’s a reference to “Aaksfard dictionary” (Oxford Dictionary) :D :D The portrayal of the massacre of English we Indians do was really hilarious. Reminded me of Amitav Ghosh’s The Hungry Tide where he uses these localised pronunciations of English words. For example, he uses “Saar” instead of “sir”. (Sorry, I just can’t help comparing things :P).

Coming to the place where the book disappointed me. I have no idea why the author had to copy scenes word by word from the movie Friends with Benefits. In fact, an entire chapter is taken from the movie. I really think the author could have been a bit more original here. I sincerely hope he doesn’t repeat this in his next book.

Overall, a very enjoyable and entertaining read. Great for reading during those tea breaks and long bus and train journeys.