The Lincoln Lawyer by Michael Connelly 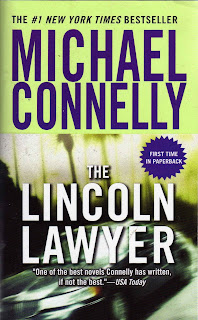 
"The scariest client a lawyer will ever have is an innocent client. Because if you [screw] up and he goes to prison, it'll scar you for life."Louis Roulet, Mickey's "franchise client" (so-called becaue he's able and willing to pay whatever his defense costs) seems to be the one his father warned him against, as well as being a few rungs higher on the socio-economic ladder than the drug dealers, homeboys, and motorcycle thugs who comprise Mickey's regular case load. But as the holes in Roulet's story tear Mickey's theory of the case to shreds, his thoughts turn more to Jesus Menendez, a former client convicted of a similar crime who's now languishing in San Quentin. Connelly tellingly delineates the code of legal ethics Mickey lives by: "It didn't matter...whether the defendant 'did it' or not. What mattered was the evidence against him--the proof--and if and how it could be neutralized. My job was to bury the proof, to color the proof a shade of gray. Gray was the color of reasonable doubt." But by the time his client goes to trial, Mickey's feeling a few very reasonable doubts of his own.

'There is no client as scary as an innocent man'

I had seen the trailor of the movie version and I kinda got the idea.The plot in a nut shell would be sleazy/anti hero lawyer,an assault/rape,a victim-Reggie Campo,a suspect-Louis Roulet.The twist- the readers are unsure who is the victim and who is the suspect.
The protagonist,Mickey Haller, defense attorney is juggling with his professional life and personal life when he hits the jackpot, a franchise client Louis Roulet.Initially the case looks like a clear win for Mickey until he starts noticing glitches in the stories of both Louis Roulet and Reggie Campo.Add to the current mess,Mickey is haunted by an old case-similar in many grounds, in which he made his client(Jesus Menendez) plead guilty in order to avoid death sentence.Now he feels he is face to face with his biggest fear-not recognizing an innocent client about which his father had written in many of his books.From there its a roller coaster ride.By the middle of the book the readers would know who did what but the question remains how will Mickey escape from the trap which he himself set.
Even though Mickey is portrayed as a corrupt lawyer who defends just about anybody who is willing to pay him,the readers would more likely be drawn to him.His charm and his quick tongue is  almost irresistible!The fact that he buys 4 Lincoln cars with the money he got from winning some old case and thinking about using it as limo service,he still being cordial with both of his ex wives and finding time to mend ways with his daughter is quite endearing.
What particularly marveled me was the vast knowledge about legal affairs by the author(which obviously shows how good a researcher he is).Not just the rules and regulations but the shady deals too which makes the plot more realistic.Loads of twists and turns leaving the readers almost breathless.The book was aptly paced,suspense increasing by each page leaving me tempted to flip pages and read the ending.
I was a tad bit disappointed with the climax,it seemed a little filmy. Other than that, an impressive read.