The Extras by Kiran Nagarkar 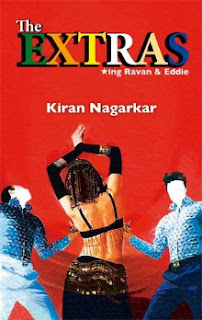 First things first,Kiran Nagarkar's 'The Extras' is a sequel to his 1995 novel 'Eddie and Raven'. I haven't read 'E&R' still I thoroughly enjoyed it's sequel which traces the adult lives of the protagonists,Eddie Coutinho and Raven Pawar.’The Extras’ is a ‘big book’.At 488 odd pages,the novel is way too long but that doesn’t make it a boring affair.Infact I enjoyed it more than any other book which i read recently.Set in the Bombay of the 80' s,Kiran tells a touching and poignant tale of life,love & hope and asks the readers to decide:are we protagonists or are we mere 'extras' in that movie called 'life'?
Raven is a lowly taxi driver while Eddie has grown up to become a bouncer-cum-bar tender in an illegal bar.Both of them share the dream of becoming a 'superstar',one day.Pieta,Eddie's sister is Raven's object of affection while Bellie,an anglo-indian girl is Eddie's girl friend.Though their love lives aren't reaching anywhere our 'heroes' are optimistic that one day they will be able to live the life of their dreams.'The Extras' is infact their journey to the same.
Nagarkar's prose is humorous and packs in plenty of twists and turns at regular intervals.Pieta's 'induction' episode was something which was totally unexpected.The humour in the book is subtle (and often satirical) but succeeds in bringing a smile on to your face most of the time.Though the pace slackens intermittently Nagarkar's prose overcomes it with brilliant one-liners and satirical observations which have been sprinkled in between.
The Extras is not a book which revolves around it's protagonists alone.The novel has got a couple of strong female characters in Pieta,Bellie and Aasman.The good thing about them is that neither of them are Bollywoodish nor do they behave as if they are from a 'Chetan Bhagat' novel.So we don't find Bellie ditching the rich,Vijendra Malaviya for her former lover nor do we get to see Aasman marrying Eddie in the end.Similarly Pieta's character is also well etched out and I firmly believe any normal girl would have behaved pretty much the same way in similar circumstances.The other notable feminine presence in the novel-Parvathy bhai,Raven's mother and violet,Eddie's mom also manage to leave a lasting impression though I was wondering where the two of them had disappeared towards the end.So is Swapnaji,the nymphomaniac who ends up infecting Eddie with a VD.
The book has got more than half a dozen LoL moments.The scene in which Eddie's mother visits him in the hospital thinking that he has got a terminal illness,for instance is genuinely hilarious.The novel has also got a couple of sub-plots like the 'Raven-gangster(three point one)' track, the 'Eddie-Mrs Fernandez',and 'Aasman-Yakub' ones.The short essays about 'Mumbai's taxis,the band bajaa..' et al which appears in the former half and the gangster's letters to his talisman which comes in the latter half were often funny and insightful.The 'Helen-E&R' dance sequence was also good.However some of the instances in the book seemed totally unwanted.For example,a couple of sequences in the Auntie's joint,the scene in which Eddie asks Bellie to give his friend a handjob only served the purpose of increasing the length of the book.
The final Verdict: On the whole,Kiran Nagarkar's 'The Extras' is an engaging read and is one of the best books on post colonial Mumbai.I am giving four on five(4/5) for this entertaining novel.
-reviewed by nikhimenon.2012.
(please do not copy)
Posted by nikhimenon at June 21, 2012
Email ThisBlogThis!Share to TwitterShare to FacebookShare to Pinterest
Labels: Fiction, Kiran Nagarkar, nikhimenon