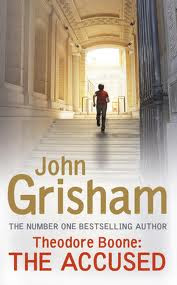 BEST-SELLERS - The Firm, The Pelican Brief, The Rainmaker

Theodore Boone is the thirteen-year-old who knows more about the law than most adult lawyers. He certainly never expected to be a victim of crime himself. But then his bike is vandalized, he's attacked while doing his homework. and, worst of all, framed for robbery.

When stolen computer equipment turns up in Theo's school locker, the police start leaning on him hard. And he is the only suspect. What if he's found guilty? What about his dreams of becoming a lawyer?

In a race against time, aided by his renegade uncle, Ike, Theo must find the rel felon and reveal the true motivation behind the crimes of which he stands accused.

FL Speak - Oh my God! If I read another one of this "Theodore Boone" series, I'll kill myself!! Absolutely NOT what I expected from John Grisham, but lets be clear, this series is meant for those kids who haven't met Hardy Boys yet. I mean yes, its a legal thriller (it says it is), but actually, its more of a mystery novel that your friendly neighborhood Famous Five can solve in a couple of days.

Theodore Boone or Theo or even "cute Teddy" is a exceptionally bright kid who has lawyers as parents. And at 13, he already knows most of the law. So its no great secret that he dreams of becoming a lawyer himself. The book begins well, we have Theo in a court room where he is watching the trial of a murderer. The accused doesn't appear in court and is presumed to flee the cops.

Now normally, when you read such a beginning, you tend to get excited, knowing you are reading Grisham. Sadly, all hopes are dashed as you proceed. Suddenly Theo's bike is vandalized, someone throws a rock at his window, and stolen computer goods are found in his school locker. The police get an anonymous call and boom! Theo is suspect number 1. Okay, still good, I was waiting for classic Grisham to combine the court room drama and Theo's situation together. What I got instead was an immense headache!

The pages are filled with Theo worrying and having nightmares of being in jail to people calling him "jailbird" to losing respect in front of his friends. And the torture never ends. We find Theo asking his friends to do a bit of snooping, which turned to be completely crap. Nevertheless, they find the thieves, thanks to his uncle Ike.

John Grisham. I have immense respect for that guy. Few of his books are one of my all time favorites. But this, this is like reading a story to a 7-year old to put them to sleep. There is nothing legal in this so called legal thriller. The court room scenario made me wonder if I would be reading a child genius doing some J.A.G style lawyering. But sadly, a big NO. Also, it turns out the courtroom scene is just added to fill a couple of pages. There is no story there and there is no big twist that we all were waiting for. I get that this is meant for a newbie teenager, but how many 12 year olds would want to read this rather than Hardy Boys or Nancy Drew?

But, I repeat again, this may still be a good book for your child. No violence and justice prevails. Isn't that what we all want to teach our children?
My Rating - 2 stars [just for the sake that I like Grisham]

P.S| I should have researched more about this book before reading. The website says, it is for kids between ages 9-12. Now I feel like a moron as I'm double the age of the maximum recommended reading age limit.

So, if you're planning to buy this for your kid or anyone else's for that matter, you can. Although I still recommend Famous Five and the Five Find Outers.
Posted by Freelancer at May 18, 2012
Email ThisBlogThis!Share to TwitterShare to FacebookShare to Pinterest
Labels: Freelancer, John Grisham, legal thriller, Series - Theodore Boone, under-18