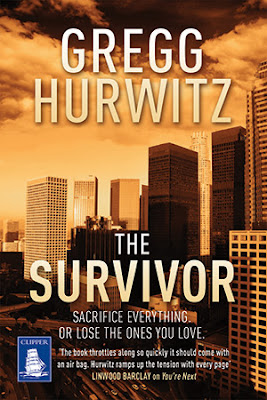 From the eleventh story of a Los Angeles high-rise, Nate looks out on the city - the traffic, the trees, the beach beyond. He breathes deeply. And then he moves one foot off the ledge and into thin air.

But before he can jump, gunshots ring out from within the building. A robbery is in progress. And Nate, with nothing to lose but the life he was about to give up, decides to intervene.

What happens next plunges Nate into mortal danger...and reunites him with the family he hasn't known for years -  a family he will do anything to protect.

EXCERPT - She has the faintest trace of a lisp, just enough to keep him  in mind of her mouth, those lips shaping themselves around each word, however imperfectly.

Nate's hearts beats a double-time rhythm. "I haven't stopped thinking about you either."

"I tried," she says, agitated. "I thought about all the the things I probably wouldn't like about you. All the stuff we'd fight about if we ever actually were together. How you really aren't that good looking."

"Because of my boyfriend." Her hands tug at the back pockets of her jeans. A one-shouldered shrug. "Ex-boyfriend now." She lifts her fingers to the echo of a bruise around his eye where her skull cracked him in the surf.

They step into a kiss, and Charles's voice floats from the other room, "Dude, hurry up. Heather Locklear's in a frickin' nightie."
FL Speak - Wow! Gregg Hurwitz is good! I'm reading this author for the first time and I like what I read. This is an absolute thriller with a splash of humor that makes everything better.

Our main character is Nate and he is on a mission. He wants to kill himself. Nate suffers from ALS, it is a progressive neurodegenerative disease that affects nerve cells in the brain and the spinal cord. He knows he's slowly dying, but Nate doesn't want to wait for that day when he's unable to move.

But when robbers decide to loot the bank from where he is contemplating suicide, Nate decides to act. His stint in the Army coming to the fore and soon he has single handedly stopped the burglars. However the crew leader escapes issuing a warning to Nate that he has brought everyone close to him in danger.

When the hero of day is kidnapped by the brain behind the bank robbery, he is faced with a threat that he never wished to hear. Now if he doesn't do what they tell him, his little girl and wife are in mortal danger. What follows is a cat and mouse game by the two parties, each wishing to stay on top of the game. With more than his life to lose and the disease slowly taking over, Nate has to do everything possible to keep his family alive, even if that means dying before he has a chance to get reunited with his family.

Fast paced, exhilarating thriller of a ride. This is one book that everyone must read. The writing is wonderful, the characters instantly loveable, even the villains for a change...The lines between father and daughter are worth remembering, the funny moments between them are hilarious, even if its full of sarcasm aimed at Nate.

PRICE - INR 395/-
Posted by Freelancer at May 12, 2012
Email ThisBlogThis!Share to TwitterShare to FacebookShare to Pinterest
Labels: Freelancer, Gregg Hurwitz, thriller