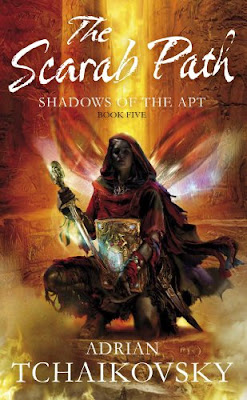 Book 5 of 'Shadows of the Apt'

The war with the Wasp Empire has ended in a bitter stalemate, and Collegium has nothing to show for it but wounded veterans. Cheerwell Maker finds herself crippled in ways no doctor can mend, haunted by ghosts of the past that she cannot appease and seeking meaning in a city that no longer feels like home.

The Empress Seda is regaining control over those imperial cities that refused to bow the knee to her, but she draws her power from something more sinister than mere armies and war machines. Only her consort, the former spymaster Thalric, knows the truth, and now the assassins are coming, and he finds his life and loyalties under threat once again.

Out beyond the desert of the Nem, the ancient city of Khanaphes awaits them both, with a terrible secret entombed beneath its stones.
FL Speak - [contains spoilers]

The war is over. Temporarily. Most authors, while writing big series, tend to lose the plot midway. It happened with my all time favorite "The Wheel of Time" as well. However, Adrian Tchaikovsky makes sure, he doesn't make that mistake. Book 5 starts with an all new beginning and almost all new characters. If you've read the first 4 books, you'll realize that almost all the original members are now DEAD!

Books 1-4 can be counted as one mini-series. If you've loved the journey so far, you can continue reading on. But its better not to pick this book up if you haven't read the first 4.

So let's recap, shall we? The Emperor is dead and Seda has assumed command of the Wasp Empire. The army has been called back and for a brief time there's peace. Thalric, is again a Wasp officer, this time reporting directly to the Empress. Stenwold Maker has realized just how lucky they were to survive this once. So he calls upon Che to lead an expedition to a distant, unheard of beetle city, Khanaphes, in an attempt to learn more about them and maybe make them potential allies. Pursuing them is Thalric, who wants to visit Khanaphes for the Empire's own agenda.

In an unknown city, where frail truce can break in a snap and loyalties exchanged for gold, Che and Thalric once again find themselves in the middle of a disaster....because unknown to Thalric, the Wasp Rekef is sending a scorpion-kinden army to take down Khanaphes and make sure Thalric stays dead. Betrayed by his Empire once again, Thalric and Che, fight to keep the enemy at bay while a higher power lies in wait...for a bigger purpose.

Our anti-hero Totho is back in this novel as well and it looks like he's still pining for Che who [beg your pardon] doesn't give a rat's ass to his feelings. For once, I loved Totho in this book even though it looks like he will turn out to be a major villain as the story continues. Apart from Che, Totho and Thalric, hardly any characters look like they will be returning in the next book. We've missed Tynissa here, but as the end suggests, she'll be one of the main ones in the next book.

This book is about Che. She grows and matures as the series progresses. The author has planned something special for her but still, I'll ask you net to get attached to the characters. They end up dying.
As predicted before, new cities are being discovered, new insect kindens rising. For a fresh start to the survival of the Lowlands, this is a hell of a second beginning. Adrian Tchaikovsky is releasing one book after another within a gap of 6 months. Just how fast is he writing????