Raiders From The North - Alex Rutherford 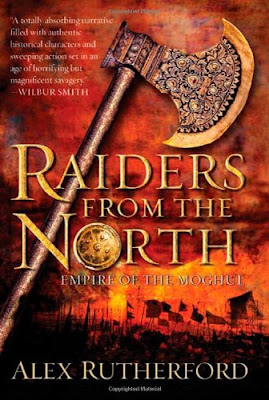 RAIDERS FROM THE NORTH

Book 1 of "Empire of the Moghul"

1494, and the new ruler of Ferghana, twelve-year-old Babur, faces a seemingly impossible challenge. Babur is determined to equal his great ancestor, Tamburlaine, whose conquests stretched from Delhi to the Mediterranean, from wealthy Persia to the wild Volga. But he is dangerously young to inherit a crown and treasonous plots, tribal rivalries, rampaging armies and ruthlessly ambitious enemies will threaten his destiny, his kingdom, even his survival.

FL Speak - I had this book with me for the last 2 months but somehow always shied away from starting it. The problem with reading a new series is that you want to complete it in one go and yet at some point of time you get frustrated by the tale. When UCV started reviewing the "Ramayana" series, I thought of starting this "Mughal Empire" series of sorts as well..

Raiders from the North is the first book of the epic "Empire of the Moghul" series and it spills the untold tale of Babur. Although most of the incidents and charcaters of the book are recorded in Babur's own biograpy "Baburnama", some of the characters are fictional and the author has given names to some characters that are referred in Baburnama but without a specific name.

Most of my knowledge of the Mughal dynasty came from the pages of my history book during school days. For the first time, it was sheer pleasure reading one of the greatest rulers of the Mughal dynasty. The book starts with a 12 year old Babur claiming the throne left by the sudden death of his father in the kingdom of Ferghana (now in Uzbekistan). With the sudden deah of his father, Ferghana became the easy pickings for his power hungry uncles. So it was no surprise when the ruler of Samarkand decided to claim Ferghana as his own. Babur, young as he might be, never did shy away from his destiny. He rallied his troops to the kingdom's defence and by a stroke of good luck, the ruler of Samarkhand fell to the invading Uzbeks as he was on his way to Samarkhand. With no heir in Samarkhand, Babur claimed the kingdom as his only to lose it within 100 days as his hometown, Ferghana was snatched by his half brother. As Babur rode to save his mother and sister, another cousin with the help of his bastard half brother, snatched Samarkand while Babur was away.

Within days, the king is without a throne. With both Ferghana and Samarkand lost, Babur had to live his life as a bandit and bid his time till he had enough army to reclaim his lost birthright. Meanwhile the barbaric Uzbeks are annexing one kingdom after another and by another stroke of miracle, Babur was offered the kingdom of Kabul after his uncle passed away. With a stable base, Babur decided to grow his empire following the footsteps of his ancestors, Ghenghis Khan and Timur.

Twice, he recaptured Samarkhand again only to lose it again within a couple of months. It was at that time he met a young market boy of his age, Baburi, and together they forged a friendship that stood the test of time and loyalty.

Babur was a just ruler and also a stern one. His word was law and people disobeying him was put to death. After sitting idly in Kabul and watching his sons grow, Babur grew restless and determined to conquer what his ancestors couldn't. Hindustan. India was an unknown land at that time. And Babur faced the might of the Indian army under Sultan Ibrahim Lodi in Panipat. The battle of Panipat and the battle with the Rajputs a few months later were to be his last of conquests. In Hindustan, he named his dynasty the Mughal empire.

Alex Rutherford has churned out a compelling tale. The relationship between Babur and his son Humayun as well as with his friend Baburi are some of the high points. Also the enmity with the Uzbeks make a fascinatting read. What you should know that THIS is history as it is, but with a dash of excitement and adventure to race the blood in your veins. For the first time in your life you're transported back in history in the royal family of the Mughals and watch history unfold in front of your eyes.

P.S| With this, I complete 100 reviews :D
Posted by Freelancer at May 30, 2012
Email ThisBlogThis!Share to TwitterShare to FacebookShare to Pinterest
Labels: Alex Rutherford, Freelancer, Historical Fiction, Series - Empire of the Moghul