Prince of Ayodhya - Book One of The Ramayana 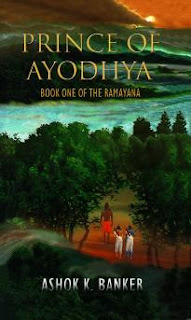 
So, I’ve taken upon myself the reading of the seven-part Ramayana series by Ashok Banker, which has gathered considerable acclaim since the time the first book was published. I will be reading the series alternating each part with another novel to avoid fatigue. Not that Banker’s writing is tiresome; but there’s only so much one can endure of the same style. So the book reviews will also come in that alternating sequence, and in reviewing them, I will treat each book as an individual entity rather than as part of the series.

Of the two great Indian epics, the Mahabharata is a clear favourite of many because of its complex layers and the imperfect hence ‘real’ characters. In the Ramayana everyone, save the villains, seems to be doing the right thing. At least on superficial reading, the characters of the Ramayana seem all black or all white, and the story the same old good versus bad. It is much easier to identify with the Mahabharata than with the idealistic Ramayana. It is so much easier to love a flawed Krishna than a perfect Rama. It was because of this irritating perfection that the Ramayana never got through to me.

My little knowledge of the epic was based on the Ramanand Sagar production aired on Doordarshan so many years ago when I was a little girl, and through snatches of the popular stories that are part of the great Indian collective consciousness. For me, Ramayana could be summed up in 7 sentences.

1. Rama marries Sita.
2. Goes to a 14-year-old exile with wife and brother in tow because his stepmother wished and his father said so.
3. Ravana abducts Sita.
4. Rama and his wanar sena defeat Ravana.
5. Sita is banished, has two sons in forest, reunites with Rama after a while.
6. Rama asks Sita for a ‘faithfulness’ test; Sita passes test, but is so pissed with Rama, she kills herself.
7. And the sundry lived not so happily ever after. The end.

But I knew there was a lot more to the Ramayana than the version in my head. And without knowing that I was waiting for a version of the Ramayana that was equally accessible and exciting, I was waiting for it. As for all things mytho-religious, I realised my hunger for it once I heard about Banker’s series last year. I let my hunger grow, and bought the whole series once the seventh and the last book was out. I am not disappointed.

The Prince of Ayodhya is as pacy an epic as you will ever see. Written in a style that will conjure graphic novel images in your head, the story moves fast. Characters from the far-removed Treta Yuga come alive speaking Banker’s modern tongue, with a smattering of Hindi. The use of Hindi words seems to me as unnecessary and at best, eccentric. His easy English is good enough to transport a reader to the Aryan city of Ayodhya and beyond.

But what is most admirable about the book is the depth with which the characters and the plot is explored. That Rama and Lakshman went on a demon-slaying mission with Maharishi Vishwamitra right at the beginning of the Ramayana is something I’ve never heard before. That Dasarath was a typical Aryan king with a healthy sexual appetite and had many concubines apart from his three wives is another fresh bit of information. Popular mythology laced with religion tends to tone down and gloss over many such details. Rama also, for example, has been portrayed in some places as a perfectly normal teen. There is also a healthy dose of magic and sorcery, which in some places reads like an LOTR or a Harry Potter.

That said, if Banker’s claim of replicating the original Ramayana in the most part is to be believed, then this series is a good place to start for those looking to savour the epic in its entirety. I am certainly looking forward to starting book two of the series.