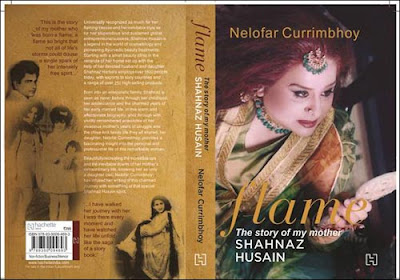 FLAME : the story of my mother, Shahnaz Husain

FL Speak - Almost every Indian women has heard of Shahnaz Husain. The glamorous Indian Diva who has revolutionized 'beauty' with Ayurveda. Therefore, its no big surprise knowing that she's well not all over the world.

Flame, is the tale of a young Shahnaz, its about her life, her trials, her undettering drive to succeed and yet stay rooted to her Indian origins. This book is written by her illustrious daughter, Nelofar, who is now the President of Shahnaz Herbals.

Its easy to appreciate someone who has achieved unparalled success in their lives. However, the path to that success is far lesser known. Shahnaz, youngest of 3 children born into a wealthy family in Hyderabad was a star student from the beginning. Her determination to succeed often resulted in being on top of things.

One of the scenes that made me cry was the death of her pet dog while Shahnaz was in a boarding school. Every Sunday, her father brought Jenny, their pet to meet Shahnaz. One such day, at a train station, while on their way to meet Shahnaz, Jenny was separated from Shahnaz's father. After hours of searching, Jenny was not to be found. A few months later, when Justice Beg was enjoying his walk in the Residency Gardens at Allahabad, he was shocked to see Jenny limping towards him. The poor dog made her way to the spot where they first met Shahnaz. Thin, limping and hurt, Jenny traveled months to this place and after finally meeting Shahnaz's father, shut her eyes forever.

Reading those lines, I couldn't stop crying and hugged my own dog.

Shahnaz's marriage at the age of 16 didn't douse the spark of liveliness in her and her husband went on the become her strength and constant guide in her success. As years passed, Neelofar became more than a daughter and they were soon best-friends. I loved reading Shahnaz's life story, her meetings with famous legendary Hollywood icon, Goldie Hawn to giving beauty advice to Indira Gandhi. M.F. Hussain even painted her when she was on her pinnacle of success.

Its a surreal journey of a vivacious Indian lady, who has showcased India into the world stage. Acknowledged as one of the brightest entrepreneurs by the President of the United States, Barack Obama, Shahnaz has been felicitated with the Padmashree award for her contribution to Ayurveda. Flame is a fascinating read through the eyes of her daughter and I'm glad to have seen it in her words.

Shahnaz Husain has made India proud. There is no doubt about that. Today, Shahnaz Herbals is run by three generations of the family and they are growing evermore.

PRICE - INR 295/-
Posted by Freelancer at May 07, 2012
Email ThisBlogThis!Share to TwitterShare to FacebookShare to Pinterest
Labels: biography, Freelancer, Nelofar Currimbhoy