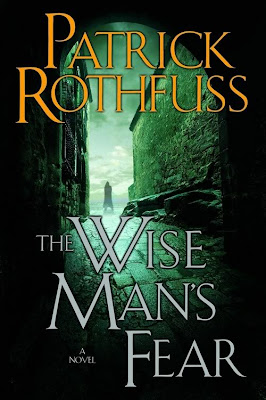 Book 2 of 'The Kingkiller Chronicle'

Read about the previous book HERE

BEST-SELLERS - The Name of the Wind

SYNOPSIS - The man was lost. The myth remained. Kvothe - the dragon-slayer, the renowned swordsman, the most feared, famed and notorious wizard the world has ever seen - vanished without warning and without trace. And even now, when he has been found, when darkness is rising in the corners of the world, he will not return.

But his story lives on and, for the first time, Kvothe is going to tell it.

EXCERPT - [this is one of the most hilarious lines]

Elodin made a sweeping gesture toward me. "Then there is the third path. The path of Kvothe." He strode to stand shoulder to shoulder with me, facing Fela. "You sense something between you. Something wonderful and delicate."

He gave a romantic, lovelorn sigh. "And, because you desire certainty in all things, you decide to force the issue. You take the shortest route. Simplest is best, you think." Elodin extended his own hands and made wild grasping motions in Fela's direction. "So you reach out and you grab this young woman's breasts."

FL Speak - When I read 'The Name of the Wind' late last year, I knew it was a spectacular debut. I knew the second book, which is released 3 years later, will be another such spectacle. And thus I avoided reading any reviews of 'The Wise Man's Fear' lest I stumbled upon a spoiler and got my heart broken or hopes high. That included careful trespassing of our newest member, Vivek's blog, where he has written a review for this book.

So you can imagine when I received the book, I left everything else I was doing or supposed to be doing and jumped in bed with it. 9 hours and a skipped meal later, I'm still clueless as to how to praise this masterpiece.

Book 2 is mainly divided into 3 essential invisible parts. The first included Kvothe's time at the University where he continued to fall in trouble, be cheeky with his masters and play the pipes at Eolain. His enmity with Ambrose didn't end with the fist book as Ambrose started to use malfeasance against him. A confrontation with Devi nearly killed Kvothe but he realized his folly and survived.

And ofcourse there's Denna. The beautiful and mysterious Denna that Kvothe has been mooning about for quite some time now. [I realized the Patrick has a gift of writing absolute wonderful romantic lines]

The second part is where Kvothe takes a break from the University and heads to Severen and meets the Maer, spends time with mercenaries, meets FELURIAN (oh yes! that's quite a tale).

At Severen, Kvothe saves the life of the Maer and is then asked to accomany a few mercenaries to capture the bandits that have left with his money. After about a month in the woods, Kvothe and the team tracks down the mercenaries and manages to overpower them by using sympathy to call down lightning. And then they meet Felurian! This was one of the best parts of the book. Kvothe's head nearly fell off when he saw the Faeling lady who was only found in fairy tales. Determined, he followed Felurian to the faeling world where ahem....after lots of...ahem...cavorting, he confronted Felurian after she was determined to make him stay. [By gods, the way Patrick described the most seductive Felurian gave me goosebumps.] She is every man's dream and their worst nightmare. She is lust. She is their darkest desire and she's powerful.

Kvothe manages to learn that one of the Chandrian was among the bandits and he survived. Although his quest to find the Amyr or the Chandrian has not gone exceedingly well, he has been, at times, lucky to find whatever clues he had.

Kvothe comes back alive and spins a tale to his mates that was bound to spread like wildfire.

Tempi taught Kvothe the Lethani way. [No I cannot explain what Lethani is since even Tempi couldn't make Kvothe understand it.] Nevertheless, he went to Ademre with Tempi and after another couple of months was fairly good with the Lethani way and they finally accepted him into their fold.

Kvothe returns to the University and for the time being everything is okay with his life. And thus ends part 2 and you can be sure, I left out a lot of things in this review.

Mr. Rothfuss has expressed quite clearly that this will be a trilogy. And now I am stunned. Unless the last book is going to be a 3000 page mega monster of a book, just how is he going to accomplish it? Or maybe, he's planning to end it differently. I was hoping after seeing Bast's continuous efforts to wake up Kvothe, Kvothe will finally rise up to save the world. Looks like that might not happen at all.

Also, what about the Amyr and the Chandrian?? Kvothe is no where near to finding them. Will he battle them? Will some of them survive? Will he have help with the Amyr? And is he getting expelled??

Other questions arise as well...Book 1 said that he's expelled from the University at a younger age than most people are allowed in. How old is Devi?? She was expelled after 2nd term...And also I realize half of what I expected are rumors. Like "I have stolen princesses back from sleeping barrow kings"....I guess this is one of the half truths of Kvothe. He did rescue girls but they were no princesses...or maybe Patrick is waiting to add them in the 3rd book.

And I still do not find it possible to jam everything in the 3rd book without being disappointed. <reserved regret>

Maybe I'll write a long letter to Patrick asking him about my insecurities. And I wouldn't want any reply because I'd rather wait to see what Patrick comes up with finally. Also, I'm not his Denna and he won't be waiting to receive my letter. Book 3 is going to be out in the future. Knowing Patrick, it'll be another 2-3 years and the wait is terrible.

After continuous 9 hours of reading, I am going back to my Felurian lest she dumps me.