The Way of Shadows - Brent Weeks 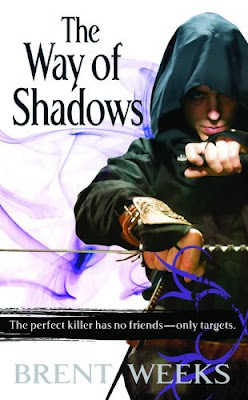 THE WAY OF SHADOWS

SYNOPSIS - For Durzo Blint, assassination is an art - and he is the city's most accomplished artist.

For Azoth, survival is precarious. Something you never take for granted. As a guild rat, he's grown up in the slums and learned to judge people quickly - and to take risks. Risks like apprenticing himself to Durzo Blint.

But to be accepted, Azoth must turn his back on his old life and embrace a new identity and name. As Kylar Stern, he must navigate the assassins' world of dangerous politics and strange magics - and cultivate a flair for death.

EXCERPT - Chest tight with fear, Azoth turned and scooted toward his hole. Six coppers was good. Dues were only four, so he could buy bread tomorrow to share with Jarl and Doll Girl.

He was a foot from the opening when something bright flashed in front of his nose. It was so close, it took a moment to come into focus. It was Durzo Blint’s huge sword, and it was stuck through the floor all the way into the mud, barring Azoth’s escape.

Just above Azoth on the other side of the floor, Durzo Blint whispered, “Never speak of this. Understand? I’ve done worse than kill children.”

The sword disappeared, and Azoth scrambled out into the night. He didn’t stop running for miles.

The book is about two characters, Durzo Blint and Azoth. Azoth is a terrified young thief who is afraid of his menacing boss, Rat and wants never to be afraid in his life. And to be that, he knows he has to apprentice under Durzo Blint, the best wetboy in the country. Wetboys are assassins with magical talents in them. And that Talent makes them better, superior.

And before being that, he has to kill his boss. *gulp*

After seeing his friend mutilated by Rat, Azoth finally manages to kill the bigger, meaner Rat and comes to Durzo to be his student. And the adventure begins.

The tale takes place in the country of Cenaria. Cenaria is small, poor and awfully corrupt. The Sakage are the underworld rulers and they virtually rule the kingdom. The Wetboys sign a bond with the leader of the Sakage to protect the leader. As you can guess, thievery and assassinations are the favorite job profiles in that country.

Azoth is trained by Durzo to be one of the best Wetboys. For that, he has to leave his Azoth persona behind and become Kylar Stern, a noble man. Kylar soon becomes good friends with Logan, another nobleman, who eventually becomes one of the key members of the tale.

There are a lot of twists in this story. And I mean, a lot. A neighboring kingdom plots the downfall of the ruling family and tries to control the Sakage. The Nine heads of the Sakage are infiltrated and Durzo and Kylar find themselves with assignments they normally would never take on. Betrayal among friends and the survival of a kingdom rests on the shoulders of Kylar as secrets about him and his master tumble out of the dark. A forbidden love threatens to destroy everything Kylar has tried to become and an undead enemy has returned to haunt his hell..

But before that, Kylar has to find his Talent and face off against his own master, Durzo Flint.

Good debut. Infact, more than good. The book reminded me a bit of Vin and Kelsier from Mistborn. Other than that, everything else is different. The magical system in 'The Way of Shadows' is yet to be explored properly as Azoth/Kylar only manages to use it in the last couple of pages. And I'm still trying to imagine the powers and stunts Kylar has achieved in my head. Hopefully, Book 2 will explore more of it.