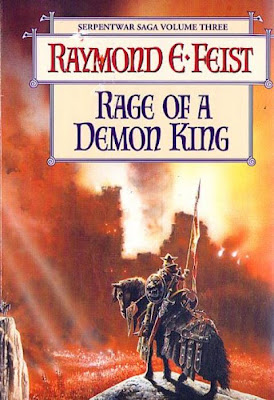 RAGE OF A DEMON KING

SYNOPSIS - A loyal soldier and a wealthy merchant have served bravely in the flames of an enduring war that is ravaging their land. But swords, bows, wits and courage will no longer be enough to defeat the scourge that is descending upon their home. For a foul and terrible thing has escaped from a world already devoured to feed on one consumed by chaos - an insatiable nightmare creature of dark and murderous nature which seeks to own and corrupt the very source of life itself.

The final conflict is joined, pitting serpent against man and magician against demon. For those who battle in the cause of good, there will be victory...or there will be doom for all.

There can be no other outcome.

Hanam said, "What is it, magician?"

The creature didn't dare touch the magician to comfort him. The hunger was too fierce, and the touch of human flesh might drive him into a feeding frenzy. "I'm sorry," the creature said.

The race for the survival of the Kingdom is on. Eric and his team barely survive the time behind enemy lines as they finally limp back to their kingdom on the verge of a siege. For the invading Panthanians are at their doorstep and Krondor will fall if the news they bear do not reach the Prince.

This book promises to be the final showdown and it doesn't disappoint. Whatever reservations I had regarding the last book has melted away with the beginning of this book. Finally the political bickering has ended and Raymond E. Feist does what he does best, write some fast paced action.

The trials of Eric and Roo are not yet over as the enemy prepares to attack Krondor. Eric realizes that Krondor must fall and thereby plans the retreat in such a way so as to maximize damage to the enemy. Well planned fortifications and some tragic sacrifices help them succeed in the plan. Roo finally realizes that his mistress has been using him and his cousin in his business and in the end, Roo is forced to duel with Duncan.

Pug and Miranda realize that the Serpent Queen is controlled by far darker forces who is maybe more powerful than them. Calis is called back to Elvandar and without him and Booby, Owen Greylock is forced to manage the troops while hastily retreating. When the demon in the Serpent Queen realizes that his real prize is within its reach, it reaches to stop Pug and Tomas. Meanwhile the Serpent Queen's minions, free from the demon's mind faces the Kingdom's troops in Darkmoor and the Panthanians realize that they have been tricked.

With nowhere else to go, the enemy clashes for a final assault and the hopes of the Kingdom rests on the weary soldiers trapped in Darkmoor to protect their prince...and the king.

By far, the best book of the series. Plots within plots, in this tale of war and sorcery. There is one more book before this saga ends and I'm waiting to see what other surprise the author will bring about. However there still remains loops to be plugged. Hints of even a greater power lurks in this book and it might be that the Panthanians and even the demons controlling them were mere pawns of a bigger game. A game where even Gods might come to play.