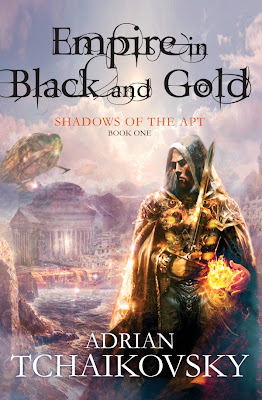 EMPIRE IN BLACK AND GOLD

Book 1 of 'Shadows of the Apt'

SYNOPSIS - The city states of the Lowlands have lived in peace for decades, bastions of civilization, prosperity and sophistication, protected by treaties, trade and a belief in the reasonable nature of their neighbors.

But meanwhile, in far-off corners, the Wasp Empire has been devouring city after city with its highly trained armies, its machines, its killing Art... And now its hunger for conquest and war has become insatiable.

Only the aging Stenwold Maker, spymaster, artificer and statesman, can see that the long days of peace are over. It falls upon his shoulders to open the eyes of his people, before a black-and-gold tide sweeps down over the Lowlands and burns away everything in its path.

But first he must stop himself from becoming the Empire's latest victim.

EXCERPT - "What will you do," he asked the Ant-kinden woman, "if you cannot go home?"

"I'll not be the first Ant renegade to go mercenary. If you now take us to Helleron I will sell my sword there," she said. "The market for us is good, and like to get better."

"The same for me," Tisamom confirmed.

"No." There was more finality in the Mantis's voice than Stenwold had ever heard from him. "No return to Collegium for me, Stenwold. No debate and diplomacy. No society. No kind words, ever again. I followed you down that path once, and see where I am now."

FL Speaks - Wow. What a debut. Of all the hundred's of fantasy books I read, this might possibly be the most different of them all.

The book starts with the Wasp Empire in black and Gold marching on to the city of Myna. Stenwold Maker and his friends prepare to stop the menacing advance before the army marches over the entire Lowlands. But their traps fail and they realize they are betrayed by their friend, Atryssa.

The Wasp soldiers, who can harness the power of the Wasp insects, fly like them, crush the city of Myna. But Stenwold and his friend, Tisamom escape the horror. 17 years later, Stenwold is living in Collegium, a city which boasts of an University and where people from all the kindens are accepted. Stenwold Maker recruits young students and prepares them as agents before the ever growing Wasp Empire turn their eyes towards the central Lowlands.

The magical system and culture created by the author is simple as well as Brilliant. In the vast Lowlands, there are different races of humans. Some are beetle kinden, some spider kinden, ant kinden, dragonfly kinden and so on. Each of these races has different attributes different from others. The Spider-kind people can influence people's decisions. Beetle-kind are hard workers, Dragonfly-kind are agile and wings sprout on their wings when they open themselves to the Art of their kind.

Not all the races are superior. The Kinden is divided into two main types - Apt and Inapt. Apt kinden do not possess and magical properties, while the Apt has certain such properties. However, Inapt kinden are not comfortable with machines and devices which the Apt are extremely comfortable with.

Che (beetle kinden), Salma (dragonfly kinden), Totho (beetle kinden) and Tynissa (spider kinden) are the latest recruits of Stenwold Maker. When his pleas about the coming invasion goes to unheard ears in the Collegium, Stenwold is forced to send his four students to the city of Helleron where the Wasp empire is currently residing in a facade of false friendship. Things turn from bad to worse when the four are attacked and Stenwold's agents in the city are compromised. As Che and Salma are caught by the enemy, Stenwold with his old friend, Tisamom and the remaining two students make their way to the ill-fated city of Myna to rescue their friends.

Painful secrets are revealed as the wary group of rebels looks for a traitor within their group once more as the enemy makes an even bolder plan that even Stenwold, the spymaster, failed to fathom. Racing against time to stop the destruction of another city, Stenwold and his wards must find out the secrets and solve the confusion between them if they are to prevent the Wasp Empire from conquering another city.

Phew! A beautiful tale beautifully written. The possibilities in a fantasy world are endless and Adrian Tchaikovsky hits a home-run with this novel. Extra-ordinary concept, I'm still wondering about other races of humans that are yet to make an entry. By far, Mantis-kinden, with their warriors and the Ant-kinden, people who can communicate to each other with their minds are my favorite race.