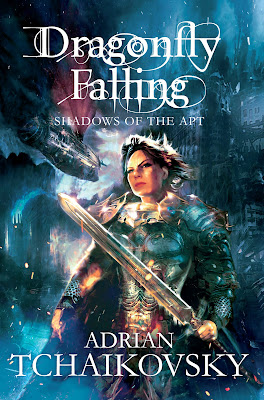 BEST-SELLERS - Empire in Black and Gold

SYNOPSIS - The armies of the Wasp Empire are on the march, and first to feel their might will be the city of Tark, which is even now preparing for siege. Within its walls Salma and Totho must weather the storm, as the Ant-kinden take a stand, against numbers and weaponry such as the Lowlands have never seen.

After his earlier victory against them, the Empire's secret service has decided that veteran artificer Stenwold Maker is too dangerous too live. So disgraced Major Thalric is dispatched on a dangerous mission, not only to eliminate Stenwold himself but to bring about the destruction of his beloved city of Collegium, and thus end all hope of intelligent resistance to the remorseless imperial advance.

While the Empire's troops are lying waste all in their way, the young Emperor himself is treading a different path. His thoughts are on darker things than mere conquest, however, and if he attains his goal he will precipitate a reign of blood that will last a thousand years.

The Commonweal during the Twelve-Year War...when the Rekef Outlander agents such as himself were moving ahead of the army, disrupting any resistance the Dagonfly-kinden could mount: raids, sabotages, rumours.

And assassination - dark deeds that he had performed gladly, knowing that the impenetrable shield of the imperial will kept him safe from guilt or blame.

"I killed her children," he recalled hoarsely. "And I made her watch."

Adrian Tchaikovsky has created a fantasy series that is unique and almost unheard of. Creating a fantasy world where humans derive their skills and powers from insects is fantastic to say the least.

By the end of Book 1, we see that Stenwold Maker and Tisamom manage to free Salma and Che from the Empire's clutches and managed to postpone the plan of conquering Collegium by ambushing the Wasp soldiers as they were about to launch a strike at the Collegium. But the threat to the Lowlands is far from over. The Wasp Empire has marched to the city of Stark where Salma and Totho have made their way to save the Butterfly-kinden lady.

On an ambush party led by a Tarken ant against the Wasp invaders, Salma and Totho fail in the attack and are captured. When the enemy offers the chance of a lifetime to Totho to work as an artificer in the Empire, Totho change loyalties and joins the enemy but manages to send Salma to safety.

Totho has been the greatest surprise in this novel. The awkward, bumbling fool who was once in love with Che and couldn't accept her rejection has aligned himself with the enemy. The same enemy that Che and her friends are trying to fight. Totho isn't exactly the villain, you kind of have a love-hate relationship with him. Circumstances made him who he is.

The Empire now with Tark under their control has their eyes fixed on Collegium and has send emissaries to another hostile ant city of Tekken to be their allies. Collegium has finally acknowledged the threat of war but there is only as much the peace loving beetle city can do. While Stenwold sent word to their allies of Sarn for backup, the Empire itself sent a contingency of their Wasp soldiers to attack Sarn. With the battle fought on multiple sides, Collegium has defend themselves against a disciplined Ant kinden soldiers.

Everything you loved about the first back is back here. Adrian Tchaikovsky really knows how to write an action packed novel. More and more insect kindens are being introduced and the characters have evolved beautifully as the tale proceeded.

A betrayal amongst his own people threatens to destroy Collegium from within as another darker power has invested itself into the war. The Emperor of the Wasp himself has dabbled into darker magic which could plunge the Lowlands into darkness forever. On his way stands the frail scholars of Collegium, a secretive Mantis kinden and an unlikely alliance of the Apt that the Lowlands has never seen before.