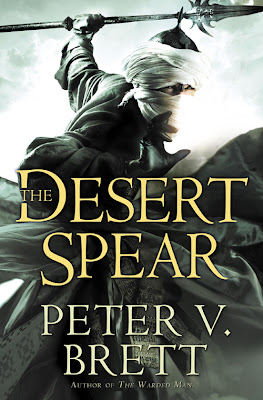 Book 2 of 'The Demon Cycle'

SYNOPSIS - Out of the southern desert rides Ahmann Jardir, a warrior king who has claimed the title Shar'Dama Ka, the Deliverer reborn. A vast army marches in his wake, intent on holy war against the demon plague and determined to recruit others to their cause, willing or not. But the Northerners have named their own Deliverer: the Painted Man, a dark, forbidding figure, whom the Shar'Dama Ka once called brother.

Betrayal has turned the two friends into fierce adversaries, and only time will tell who is strong enough to withstand the might of the demons as they strive to obliterate humanity's defenses once and for all.

EXCERPT - 'Might as well come out!' he called loudly into the night. 'I know you're there! That changing demon ent smart enough for this!'

There was a rustle off to the side, and a demon appeared. It was small and slender, with an oversized head and a high, knobbed cranium. Its eyes were huge black pools, and it bared only a single row of sharp teeth at him. The talons at the end of its delicate fingers were like an Angierian lady's painted nails.

'Been wondering when I'd run into one of you bastards,' the Painted Man said. He tapped the large ward tattooed in the center of his forehead. 'Painted myself up special for it.'

FL Speak - Peter V. Brett continues the tale of Arlen from his epic debut into another wonderful tale. When 'The Painted Man' was published, it created quite a storm and almost everyone had it in their wishlist.

So naturally, I had to pick it up as soon as possible. However, even though 'The Desert Spear' is equally exciting and fast paced, it didn't hit the sweet spot for me. Mainly because, the story delves into the past rather than the present. Its more of a tale of Jardir, the Shar'Dama Ka of the Krasians than Arlen and hey, am an Arlen fan.

The Painted Man takes us way back into the past where Jardir was a kid and it is the tale of his growth to the leader of the Krasians. Jardir and Abban, who once were the best of friends and it is their tale of bravery and sacrifices along the way. Even though I do not like this Jardir dude much, I can't help but feel for his plight and cheer at his success, even though eventually he ends up betraying Arlen. Much of Jardir's rise to fame has been written by the Gods. {well that's what his First wive says. Yes, First wive. He has loads of those wives. Lucky chap indeed.} However, Jardir later realizes that his life was never his own. He has been manipulated slowly to be in the position he is now, and that included betraying his once friend, Arlen. Nevertheless, Jardir has come to terms with that for the future good.

Since the Krasian invasion of Fort Rizon, the Painted Man aka Arlen has been moving from city to city in the hopes of building an alliance against the coming Krasian horde. Also, Arlen is slowly losing his humanity as he is turning into one of those wretched corelings by the day. He has trouble walking in the sun and the earth's core is slowly pulling him downwards every morning.

Leesha, whose proposal Arlen rejected is now being wooed by Jardir after he saw her fighting the corelings. And Leesha, like the naive bimbo she is, ends up cavorting with the enemy. {Err, not exactly THE ENEMY, but hell, I can call him an enemy since he betrayed Arlen right?}

Arlen ends up riding to his home town where his own father fails to recognize him and rescues a girl in the process who ends up following him as he hunts corelings at night. Now comes the fun part. A new type of completely kickass coreling appears and Arlen barely manages to save himself. But he does enough to see that a whole new, immense horde of corelings are gathering for the final war. After the fight is over and he is pulled back to Mother Earth, Arlen proposes to the chick. {I mean, what on earth is happening!!!}

The final battle is coming and the Deliverer needs to be ready. Will it be Arlen or Jardin and what will happen when they meet again, that remains to be seen.

I finished the book in 4-5 hours as I simply couldn't put it down! Scintillating stuff! Looking eager for the final part.