Blood of the Mantis - Adrian Tchaikovsky 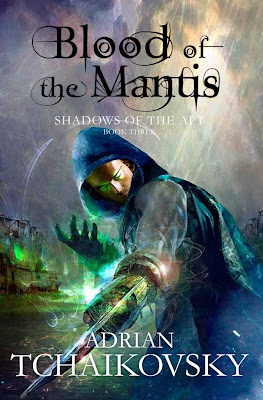 BLOOD OF THE MANTIS

Book 3 of 'Shadows of the Apt'

SYNOPSIS - Driven by the ghosts of the legendary Darakyon, the moth-kinden Achaeos has tracked the stolen Shadow Box to the marsh town of Jerez - but he has only days before this magical artifact will be lost to him forever...

Meanwhile, the forces of the Wasp Empire are mustering for their great offensive. Stenwold and his followers have only a short time in which to seek allies before the Wasps are on the march again, conquering everything in their path. And if they cannot throw back the Wasps before spring, then the hated black and gold flag will be flying over every city in the Lowlands before the year's end.

And should the Shadow Box fall into the hands of the Wasp Emperor, then nothing will save the world from his relentless ambition.

EXCERPT - The Mayfly Prolonged had hold-space that just fitted Nero and Che crouching, comfortably enough for him but exceedingly cramped for her.

"You know the Empire airship you had all the problems with," he began.

"Well we reckon it was dropping off," said Nero. "Because there's a whole load more Wasp soldiers in Solarno now, enough to get everyone worried. I think its starting."

Adrian Tchaikovsky continues his impressive tale of the Lowlands with another fact paced novel. Book 3 sees the split of Stenwold's agents all over the Lowlands in the hopes of creating an alliance that will challenge the ever-growing Wasp campaigns.

Achaeos, Tisamom and Tynissa make their way to the black market city of Jerez where the Shadow Box was last supposed to be seen. They are also accompanied by the renegade Wasp officer, Thalric, who is still unsure of his loyalties. Upon reaching Jerez, they are constantly monitored by Wasp agents who wants the Shadow Box for their Emperor.

Meanwhile Che and Nero make their way to the Spider city of Solarno where the Wasps are playing the games of the Spiders' themselves. Cleverly manipulating until they control the city without bloodshed if possible. Che and Nero meet Taki, a fly-kinden pilot who accompanies them and rescues them when the Wasps finally make their move.

Stenwold travels to the ant city of Sarn, which is now facing direct war from the Wasps. Because if Sarn falls, Collegium will fall. The Alliance of the Lowlands is formed with the sole intention of challenging the Wasp advance. Unfortunately, the assassination of the Sarnesh queen threatens to overcome all the work Stenwold has accomplished.

More and more insect kindens are coming out in the later novels and we may yet see some water creatures soon. The writing is fast paced and now that so many cities have been covered in the saga, you can be sure that the war will not be ending soon. This book focuses on espionage rather than on war. And the city of Jerez is specially made for such a craft. A city teeming with thieves, assassins and black marketeers, Adrian Tchaikovsky proves that he can write about war and covert operations with the same ease.

The world of the Lowlands is growing. Its good to see that the cities are being explored one by one instead of just exploding and then the ruckus of multiple plots in multiple cities. However, it does seem that such a time will arrive in a near future when the author has to write about all the kindens and cities so as to keep as on the loop of what's going on. Regarding the characters, I think Tisamom is not going to grow at all. He's still the broody, veteran, confused killer he is supposed to be. Totho is downright irritating even though he has walked over to the enemy camp. Cheerwell is well, a third wheel in the whole plot. But atleast she's doing something.

A good continuity, this book didn't disappoint at all. A shocking twist before the end reveals that we might see even more of the insect kindens.