Those Small Lil Things... In Life and Love - Rahul Saini 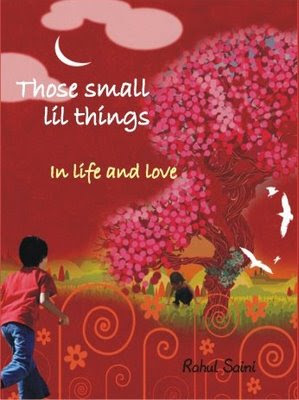 AUTHOR - Rahul Saini is an Indian author of contemporary fiction. His books have strong comic tones and present up-beat stories that portray the fun loving, free spirited and outgoing character of today’s Indian youth. His first book ‘Those Small Lil’ Things in Life and Love’, which was essentially a boy’s tale about growing up and his relationship with girls through the years, was published in 2008 and made it to several bestsellers’ list across the nation. He believes that today's youth likes fast paced stories which are either larger than life or which they can relate to. He avoids using themes like sex and sleaze to please the masses.

His novels have numerous references to many movies and T.V. Shows

SYNOPSIS – Have you ever known a guy who would gift her girlfriend soap? Well, say hello to Raj, a young architect, who is a huge film buff and believes that life, is full of ‘filmy angles’. He hates his job and has an almost evil boss. He has a shoddy love life, is heart broken and feels that he is the loneliest person on the face of this earth.

It’s a story connecting all those small little incidents in one’s life that one never forgets.

It’s a journey through growing up. A journey from love, to out of it. Through joy, sadness and anger. About childhood friendship blooming into love. About the one you love not loving you back. About friends making each other happy, and about friends making each other sad – about friends fighting. It’s about being completely sure about things, and at the same time, being utterly unsure about them. It’s about school, college and professional life. It’s a lot about the heart, and its desires.

It’s a story about finding it tough to adjust at times, and then missing it later when they are over.

Pulkit Speaks – A simple story about simple joys of life, which in end are most important of them all

I went to receive my father from railway station as he was coming back to Kanpur, returning from a conference. His train was late and I decided to pass my time giving cursory looks to books. Those were the days, when this entire college-time-romance or u can call them coffee-table-timepass books were emerging on the scene after Chetan has already shown the commercial potential of that segment. This book has the kind of cover, that is bound to catch your eye and among all shirsti titles present with the carter, I picked up this one solely for this reason(judge me if u like)

Its a light hearted story overall...which deals with common experiences threaded together with a emotion called "Love", As the title suggests to be so. Now before I go further into the review, I would like to say that If you're a grammar Nazi or one of those people who can't bear it when punctuation goes wrong, you probably want to stay away from it. To be honest, it's not really a… novel. It's more like an extended version of a Chicken Soup story. basically tells a simple, happy and playful story of the thoughts of the protagonist wherein while on some moments you'd nod your intellect to agree with his thoughts while sometimes yearn to dive into the pages and literally slap him when it becomes repetitive and slow in some phases. However to an extent I can say that I enjoyed the book and would recommend it to anyone who wants to read some fun prose, light hearted simplistic narration (Life in itself is very serious sometimes, and even nonsensical as it may sound to literary greats, these books too can serve as a stressbuster to some)

This book is divided into three parts. It is mostly a parallel story between protagonists present and his subconscious recalling of sweet reminiscences from past.

Part one deals with the childhood of the lead character, his initial challenges of school as it began and first interaction and crushes into the co-ed life.

Second part is the journey towards the end of the school life. This was my favorite portion of the book! Certain incidences that takes place between Neelhans and Raj, as well as between Rushi and Raj are memorable and genuinely cute. I had a very fun school life, with numerous instances written in the book that took me back in the memory lane and left me missing those times. Last flashback part is the story of Raj in the corridors of his college life. The author has a sincere effort to take his readers back into their memories of the good times of childhood and adolescence gone by while using protagonist’s story as a directive push. Alongside the flashback phases of Raj, the book states protagonist’s current life at work and home, and tries to scribble office humor and frustrations of dealing with a rough boss.

Excellent read for a teen who has recently started reading books. I again mention Seasoned readers many find it amateur and kiddish. The relationships described are very simple and life does seem quite simple from the book's point of view and that to me appeared to be the beauty of it.

It is a simple tale and depending on which category of reader class u belongs to, it might give you something to muse about for the evening. This book is very much recommended for teens who have hopelessly not been able to profess their love to the ones they love.

You can give it a try and have a good time reading it. Judge it on the basis of what it tries to promise and not as a work of some serious literature and you are sure to have a smile sometimes while reading it. I appreciate the debut effort of Rahul in trying to be sincere with the kind of stuff he was trying to tell in this book and to the target reader class which is losing innocence very quickly these days.

PS – There is a new cover to this book now. All in white background, it has a very sweet positive personal feel about it. It contains small-small pictures, all arranged in a collage – connecting life of the author, cute indeed.