Some of the whole by Abhijit Bhattacharya 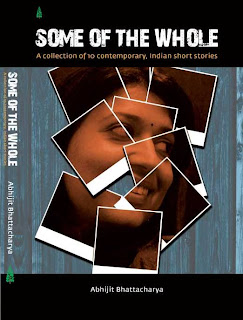 The prologue sets the mood of the book as it outlines the characters before ypu meet them in their natural setting. In the Mumbai airport lounge , everyone looks same - engrossed in his/her story and reflecting on their reasons to be here.But later as you meet each one of them, you marvel at the way Abhijit weaved their tale.

A son discovers a shocking truth about the tenant his father keeps in his absence ; A lady seeks help from an acquaintance to get rid of a stranger following her ; A person gets his beliefs about love challenged and re-inforced within the same night , A guy feels guilty for cheating on his wife  and the price he pays , A lady intent on a one night stand , A guy shattered after his wife's death , A man taking risks to revive his business , A long distance relationship ends some where ; A miraculous escape from death for another , and lastly a death justified !

I found myself marvel and even relate at times to the people in these situations , express pain and joy for some and a heartfelt sigh to others as if such people exist. I think they do.

The stories are named after popular songs and each begins with the scene before the end described first,moving into a flash back mode all time.

The writing is interesting ,simple and totally engaging in each story.