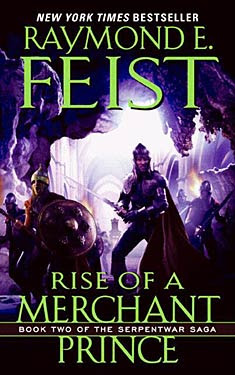 RISE OF A MERCHANT PRINCE

Book 2 of the 'Serpentwar Saga'

SYNOPSIS - Surviving the wrath of the fearsome Sauur -  a hideous race of invading serpents - noble Erik and cunning Roo have delivered a timely warning to the rulers of the Midkemian Empire, and are now free to pursue their separate destinies. Erik chooses the army - and the continuing war against Midkemia's dread enemies. Roo lusts for wealth and power - rising high and fast in the world of trade. But with luxury comes carelessness and a vulnerability to the desires of the flesh. And a beautiful seductress with her ruthless machinations threatens to destroy everything Roo has built and become - summoning catastrophe into his future..and terror into his world.

EXCERPT - Roo groaned. Duncan laughed as he snapped the reins, urging the horses out of the city gates. Duncan , Luis, Erik, and Roo's other friends had feted their friend on the announcement of his coming fatherhood and now Roo was paying the price. He had been helped home by Duncan and had fallen into bed nearly comatose next to Karli. Without comment she had roused him the next day when, against expectations, Duncan had arrived on time.

FL Speaks - [contains spoilers]
Erik and Roo are back from the war and are free men. Erik decides to stay with Calis and rises to the rank of Sergeant in the army while Roo decides to be a trader. This book is more about Roo than Erik. Roo, thanks to his wits and close fighting skills rises to be one of the wealthiest traders of Krondor while doing the ocassional odd jobs for the Duke who's raising an army to stop the threat of the Panthanians.

This book is more of a bridge between book 1 and book 3. I don't know why the author decided to make it a separate book nevertheless its a fine continuation of the adventures of Erik and Roo. Roo goes back to Krondor and marries the daughter of a local trader to establish himself as trader. But when his father-in-law is murdered by his local enemies. Enraged, Roo takes the fight to the enemy.

But married life is never bliss unless one is in love with the other. When a beautiful seductress makes her entry into his life, Roo forgets everything that is noble and falls for the temptation of the flesh. Little did he know he was manipulated for machinations far beyond the future. As his business blooms, he is unaware of the spies among his company as they wait to strike him down.

Meanwhile Erik makes a second trip to the enemy's camp. Together with Calis, they discover a terrifying truth, that there is a third player, who is much more powerful. In the fighting that ensures, Bobby is killed and Calis injured. With half of his troop dead, Erik struggles to keep his Captain alive when Roo comes along to save his childhood friend.