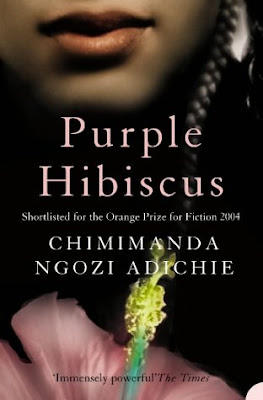 PURPLE HIBISCUS
Author :  Chimamanda Ngozi Adichie
Genre : Fiction
Synopsis :
Fifteen year old Kambili's world is circumscribed by the high walls and trees of her family's compound. Her wealthy catholic father, under whose shadow Kambili lives, while generous and politically active in the community, is repressive and fanatically religious at home. When Nigeria begins to fall apart under a religious coup, Kambili's father sends her and her brother Jaja away to stay with her aunt. This visit lifts the silence from her world and gives rise to devotion and defiance that reveal themselves in unexpected ways.
Chandana Speaks:
Kambili is fifteen years old (for most part of the book) and lives with her brother, mother and father - who is an extremely wealthy catholic. Her father Eugene is both a religious zealot and a violent figure in their household, often subjecting his wife Beatrice and her brother Jaja to beatings and psychological cruelty. Kambili discovers a new way of life when she and her brother are sent away to her aunt, who is a university professor. Their house is noisy and full of laughter. Its a complete contrast to what Kambili and Jaja are used to. Though their aunt's family is catholic, they practiced a completely different form of Catholicism, making for a happy, liberal place that encouraged its members to speak their minds. In this nurturing environment both Kambili and Jaja become more open, more able to voice their own opinions. Ultimately, a critical mass is reached in terms of the lives of Kambili, Jaja and the existence of their family as it once was. Unable to cope with Eugene’s continual violence, Beatrice poisons him. Jaja takes the blame for the crime and ends up in prison. In the meantime, Aunty Ifeoma and her family go to America to live after she is unfairly dismissed from her job as lecturer at the University of Nigeria. The novel ends almost three years after these events, on a cautiously optimistic note. Kambili has become a young woman of eighteen, more confident than before, while her brother Jaja is about to be released from prison, hardened but not broken by his experience there. This is a book about the promise of freedom; about the blurred lines between childhood and adulthood; between love and hatred, between the old gods and the new.
Price : INR 246/-
Rating : 4/5
p.s - With this review I bit adieu for a while! Ironically, right from the day I have joined ALOP as a member, the number of books I've been reading has been dwindling down steadily. And being the voracious reader that I am or rather, have been all my life, I couldn't digest the fact that I was hardly posting any reviews here. I mean 2 per month??? I used to read two per day for God's sake!
Anyway now the situation is even more tough. The only kind of books i'll be reading for the next few months are Financial accounting and Statistics and the likes of it. So unless you guys want reviews of those :P, I bow out for now!
Posted by Chandana at March 02, 2012
Email ThisBlogThis!Share to TwitterShare to FacebookShare to Pinterest
Labels: Chandana, Chimamanda Ngozi Adichie, Fiction, Purple hibiscus